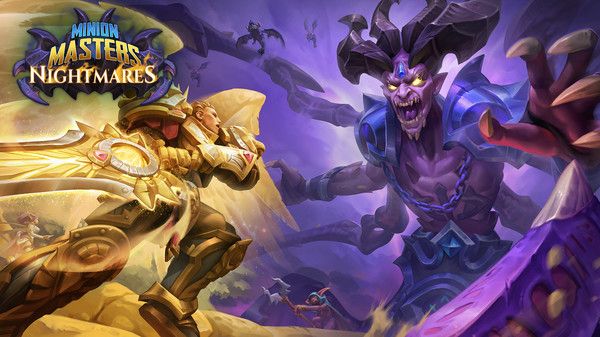 Nightmares DLC
As Mar’Dred, the Prince of Nightmares emerges from the void, he brings his demonic legions with him into our world to seed chaos…

The Nightmares Faction Box will provide you with Voidborne trickery you’ll need to lay waste to those foolish enough to oppose you. Containing +300% value of Voidborne cards, including the sneaky Mal’Shar and 2 exclusive Voidborne cosmetics.

“Pick Up and Play PvP at its finest”
GameSkinny

“If you’re familiar with things like Nexus Wars and Castle Attack, or just Clash Royale, you’re immediately gonna be able to pick this game up very very quickly. Obviously there is quite a lot of learning involved with the different troop types and cards available. But it’s really slick. It’s plays really really well. It’s a good version of that game type, for PC.”
TotalBiscuit

You’ll need a base game of Minion Masters to play this DLC. The base game is free and available here, and the free DLC is here (free only before 24 Aug 2020 @ 7:00pm CET)