It’s not often that one show can take control of an entire generation. For my childhood it was Power Rangers… This multi-cultural love-letter to nostalgia took over many homes in the 90s with force. Its flimsy morals and clunkily scripted acting were apparently exactly what most of the world was looking for, as we stumbled out of the cocaine-fueled haze that was the 80s. There are very few shows today that manage to galvanize fans in such massive numbers. Maybe Spongebob comes close, but he’s a crossdresser who lives inside of a fruit. Chroma Squad is a tactical RPG about a tokusatsu show similar to Power Rangers. Each character has a specialized role, but are able to be slightly customized to your liking depending on the actor/equipment you choose. Chroma Squad does have a few blemishes, but is an overall amazing experience. Will it hold up for those who aren’t wearing nostalgia goggles? Let’s find out as we look deeper at Chroma Squad. 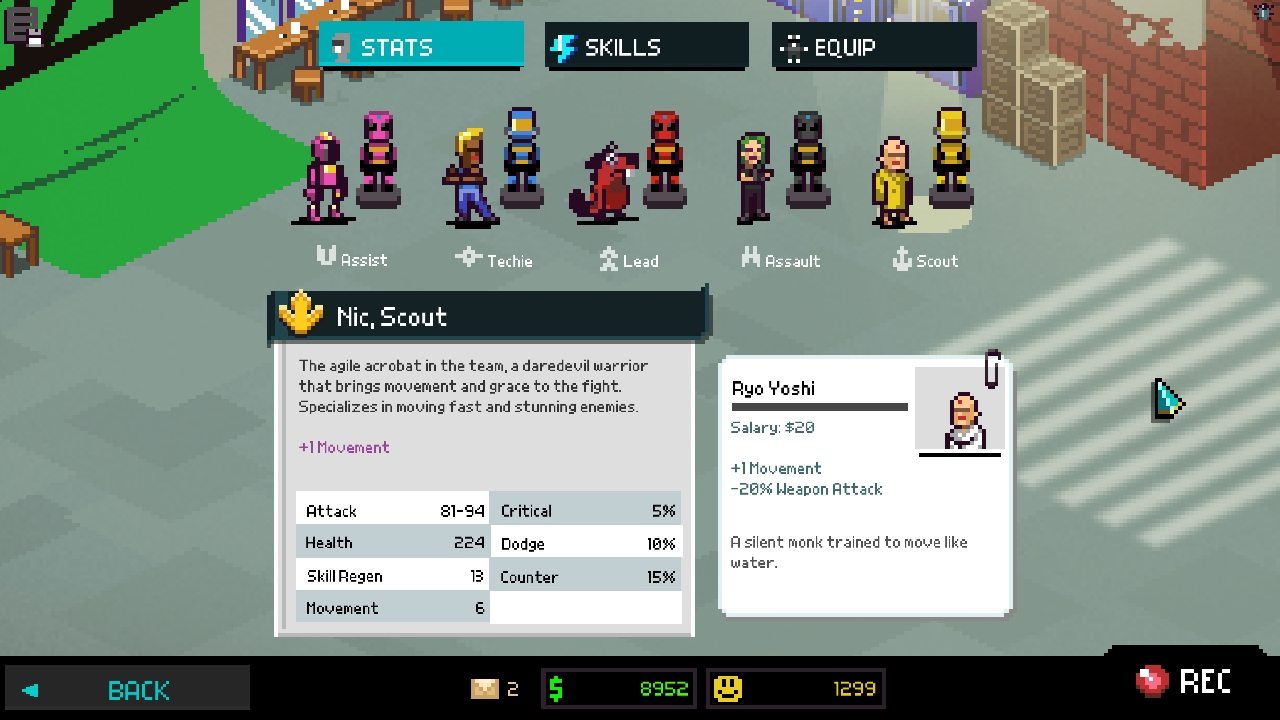 Fantastic retro style coats Chroma Squad, from the graphics to the music. While the gameplay starts out feeling extremely simple, it quickly deepens as the odds are stacked ever-higher against you. After moving you can attack, move a second time, or prepare for teamwork. Teamwork is an awesome aspect that allows your characters to toss each other around in fantastic acrobatics, or prepare a combo attack on an adjacent enemy. Teamwork attacks are an absolute necessity, as later enemies take multiple attacks to defeat. Aside from fantastic agility and teamwork, the Chroma Squad doesn’t have much in the way of firepower when they’re in their 28-year-old-teenager form. However, once per fight though, you can Chromatize. Transformation not only fully heals all your characters, but also unlocks a variety of special abilities. Every season you will unlock a couple of new skills to pick from, and this extends the replayability of Chroma Squad greatly. 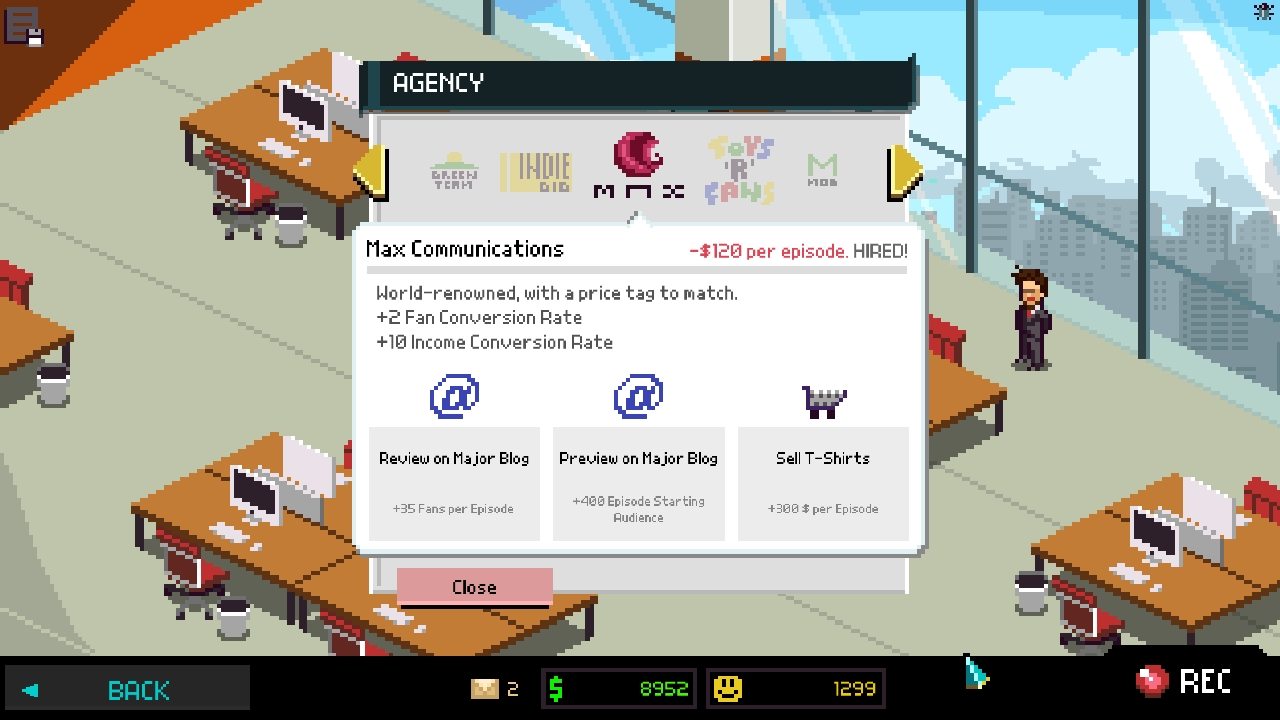 The fights take place in a variety of sets. Some are fantastic to look at, with a variety of hazards. Others are completely stark with nothing on display except for a couple lighting guys and key grips using their bellies to knock bowls of mac’n’cheese off of the craft service table. At least that’s what I like to imagine. The gameplay grows even deeper as you realize there are a variety of director actions you will need to follow during the combat in order to maximize your audience and gain new fans. Chroma Squad isn’t all about high-flying action though. Between episodes you will need to craft equipments and gear up your heroes, choose between a variety of marketing agents with tons of different boosts, and assemble your mecha to do battle when your enemies go super-size. The management aspect is extremely interesting, and while praying to RNGsus while crafting for a decent upgrade can become a bit frustrating, it again does wonders to extend the replayability. 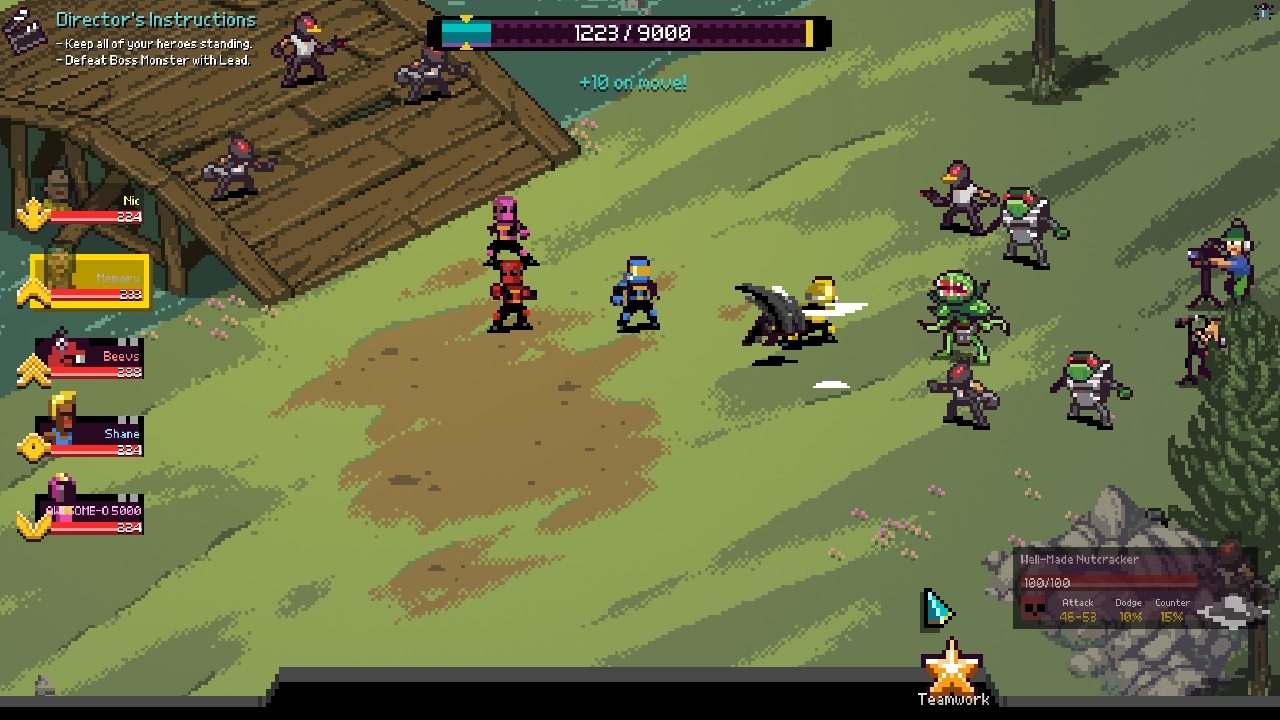 I’ve sung so much praise for Chroma Squad that I am loathe to point out the low points, but it is about that time in the review. The majority of the controls are point and click, which can be a bit of a drain when sitting for extended play sessions. The less-inspired set designs seriously break my heart, as there is much more potential than a big empty room. The story does alright, aside from some pretty blatant SJW messaging in the beginning. It might be tongue in cheek. I can really only hope. Overall I think Chroma Squad is an experience worth having, especially if you were raised on Power Rangers or Big Bad Beetleborgs or VR Troopers. There really were just a plethora of these shows on in the 90s. This is why it’s pretty obvious to me why this game was so easily kickstarted, and I am positively overjoyed that Behold Studios was able to bring Chroma Squad very close to its full potential. I really do hope to see a sequel sometime in the future.

Verdict: Amazing fun. Not as replayable as something like Final Fantasy Tactics, but still worth a look.

Get 4 free games on Itch.io this weekend