Competing with other human beings is in our nature. Sure, you can stomp a team of bots… But what’s better than bringing a team of buddies and beating another team of buddies, from an obviously strange and evil parallel universe, back through the fabrics of space and time? Nothing! I hear you cry. But alas, you are wrong, dear reader… What if Left 4 Dead 2 and Shadow of the Colossus had a sweet, sweet lovechild? You could be the Tank, actually bigger than the Tank. Think around 40 feet tall… Run around the jungle and ravage the wildlife until you have the strength to send all 4 puny humans from the opposing buddy squad to their graves with no help at all. This would be that. It’s time to Evolve. 2K has a fantastic catalog of series under their belt, but this one might top the cake. Five players will be selected, four will be hunting the monster… The fifth will play as the ravenous behemoth. This is a game about cunning, quickness… And most of all, ruthlessness. Let the Most-est Dangerous Game, commence!

The hunters are a team of four classes. Assault, Medic, Trapper, and Support. They each hold extremely vital components to trapping the monster. The creature moves fast, and you will need a way to slow it down, whether it’s nailing it with the Medic’s Tranq Darts or capturing it inside the Trapper’s Mobile Arena. You will also be able to scale any terrain you find, with liberal use of the MOST awesome jetpack. The classes are all fun to play and seem to mesh well together. 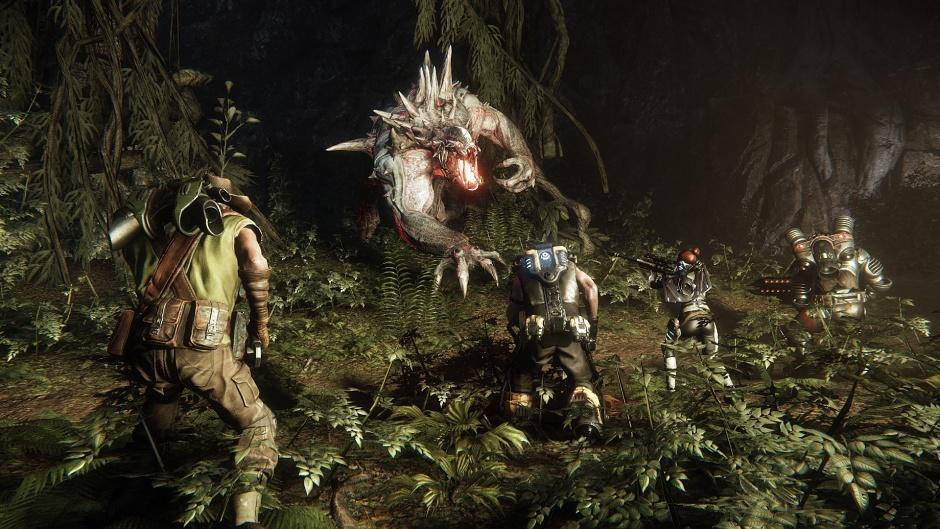 Minor things need tweaking… Like the vertical hitbox on the Support’s Orbital Barrage. If a monster, taller than a Humvee is standing next to a Humvee, and a huge SPACE MORTAR comes down directly on top of the vehicle… I’d think the monster would take some damage. The cooldowns for some skills also might be a little long (I ALWAYS felt like someone on my team was in need of a heal) but it is a game in alpha, and even taking into account some minor flaws… The results are highly impressive.

As the monster, you start out tiny (for a monster) and with very little armor, you will need to hunt and kill the amazingly varied wildlife found in the environment in order to gain some armor, and eventually evolve. There are 3 stages of evolution, with only stage 2 being a completely fair fight, which makes for an interesting dynamic when the hunters become the hunted. All is not lost, even for baby monsters… You can stealth to hide your footprints or simply walk through water. The various NPCs in the environment can certainly cause a mess for the hunters if given the right provocation as well. 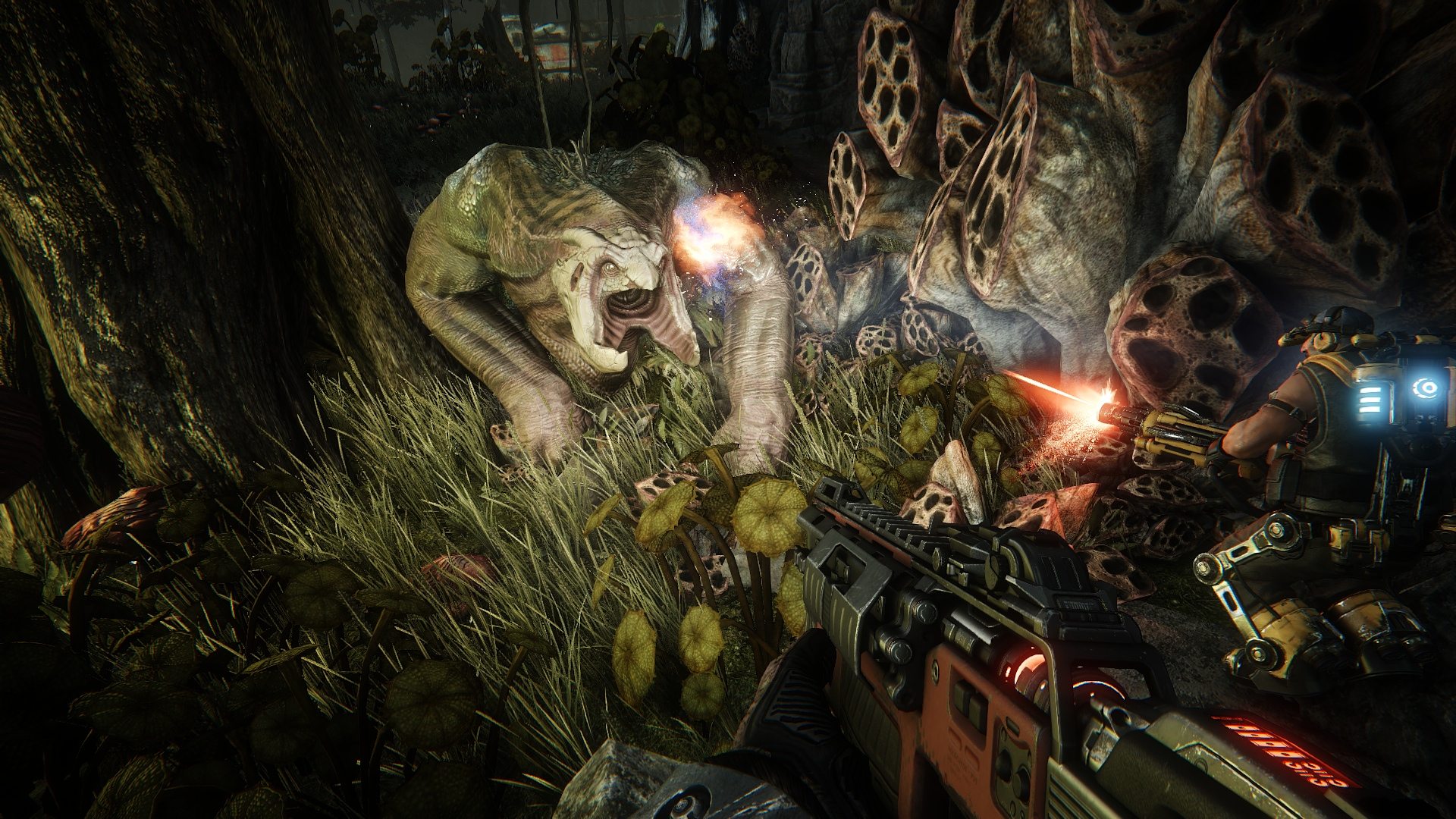 On the flip side, there are plenty of flocks of birds that are startled by monsters who don’t take care to stealth through their grass… And even if you should avoid those, carrion birds will occasionally flock to your fresh kills. Picking your battleground is also important, even when trapped inside a Mobile Arena, find the best spot to defend yourself, terrain is everything. Punch a hunter off a cliff? Why not? A ball of fire down the middle of the cave might also make the hunters reconsider their advance. From only feeding in tree cover to only walking in water… There is much to learn if you wish to be a master monster. 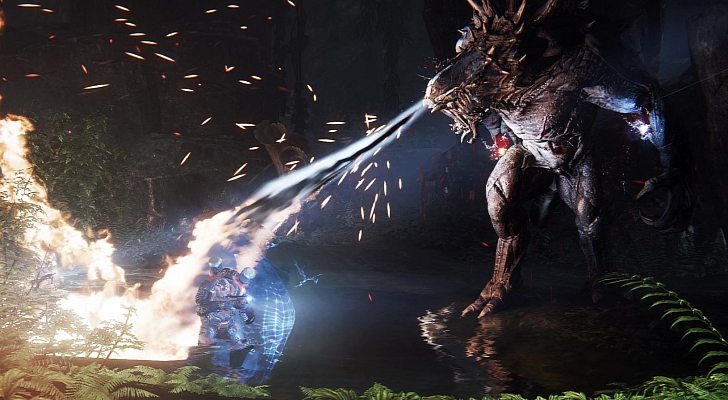 The graphics in the game are absolutely breathtaking, from the environment to the players themselves… Prepare to be stunned. There are unlockable perks for each player class, including the monster, that can be gotten by leveling up. Even beyond that, there are unlockable inside each class, so if you really love playing support, you can flaunt what a veteran monster-slayer you are with an even MORE spankin’ skin. (That’s not a masturbation joke… Until now!) It also already features full controller support! The mechanics are amazingly deep, and you can tell right from the start whether you’re hunting a veteran monster, or a first-timer. Some might not enjoy that the game switches from third person as the monster, to first person as the hunters, but I think it’s brilliant. It might be easier to play as the monster due to not having to depend on anyone else, but I’ve had about a 50/50 win ratio on the 20 or so matches I played. My small sampling of anecdotal evidence is truely proof of balance!! (Cue angry emails) 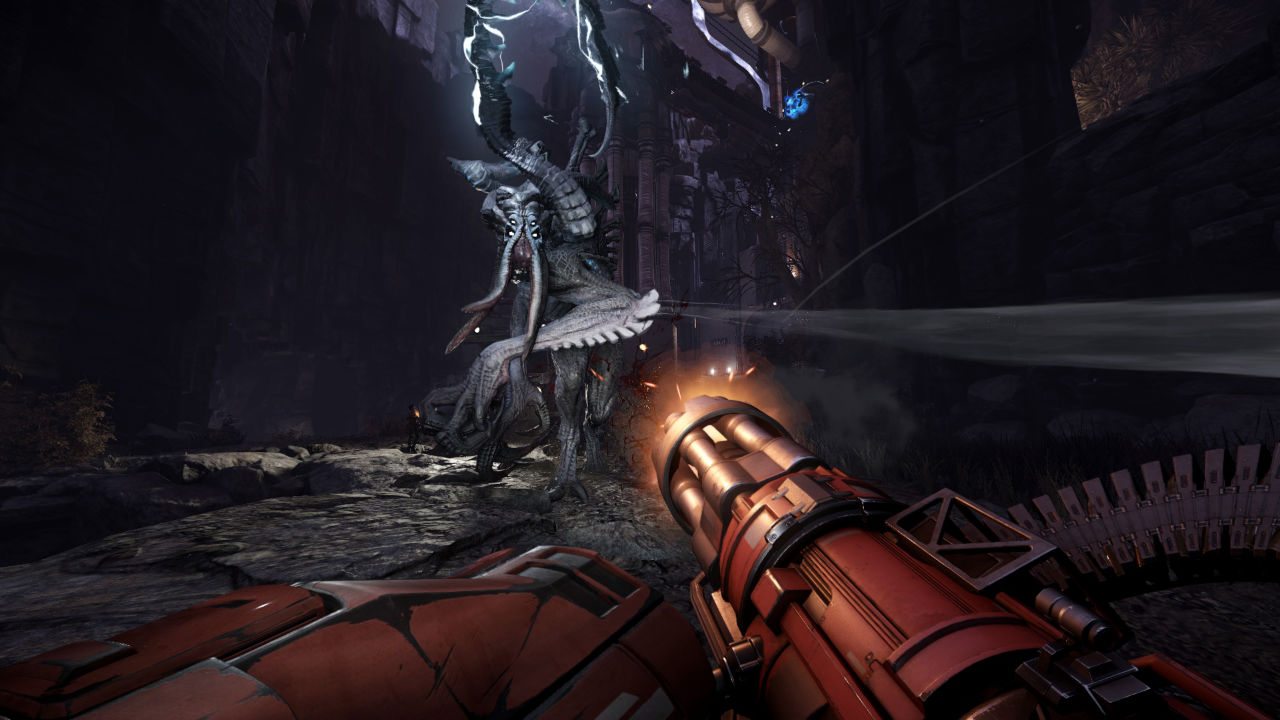 On the negative side, there are SO MANY LOADING SCREENS… Load to enter the lobby, load to enter the loadout screen, load to start the game. Then if you have a newbie monster, slay him in 5 minutes, and prepare to do it all over again. 2K is known for games that are pretty, and games that will put a heavy load on your graphics card… But the amount of time wasted at the loading screen is unbelievable, and I can only hope it will be fixed before release. I’ve also experienced some connection difficulty, even though my PC is plugged directly into my router, and losing connection when you just hit stage three is truly devastating. I would also like to point out that there is currently only one game mode, so as fun as it is to round up your pals and hunt down a monster or smash a team of hunters… It can become a bit monotonous after a few matches… Unless you REALLY enjoy the thrill of the hunt.

Overall, I think the game shows a ton of potential. It is a ton of fun to play, no matter what role you end up being assigned. While the game is easy to pick up and play, there is a lot of hidden depth as well. People are sure to enjoy collecting the different monsters and guns from playing their class. The unlockable perks to customize play and online versus almost ensure that it will be a beauty of a game with a long and healthy life, but will the loading screens and minor bugs turn it into a beast? Only time (and an actual release) will tell.

Summary: A fantastic game for coop or solo play, if you can stand infinite load screens.