Four seems to be the perfect amount for a team in the type of game where members can be incapacitated. Two is not enough, while five is too many, and you will likely end up with a third wheel… But four. Glorious four. I mean, commanding the ultimate indestructible hero is always satisfying, but there’s something about strategizing and leading four guys, who couldn’t necessarily do it alone, to a sweet victory. The more insurmountable the odds, the better… And this game has got it down pat. Wandering through the futuristic, dystopian, open world city toward the objective of your choice was a great decision. There are no load screens, just a large contiguous map and all the wonderfully rendered little people inside it. Seems we’re off on the right foot… Let’s look a bit deeper at, Satellite Reign. 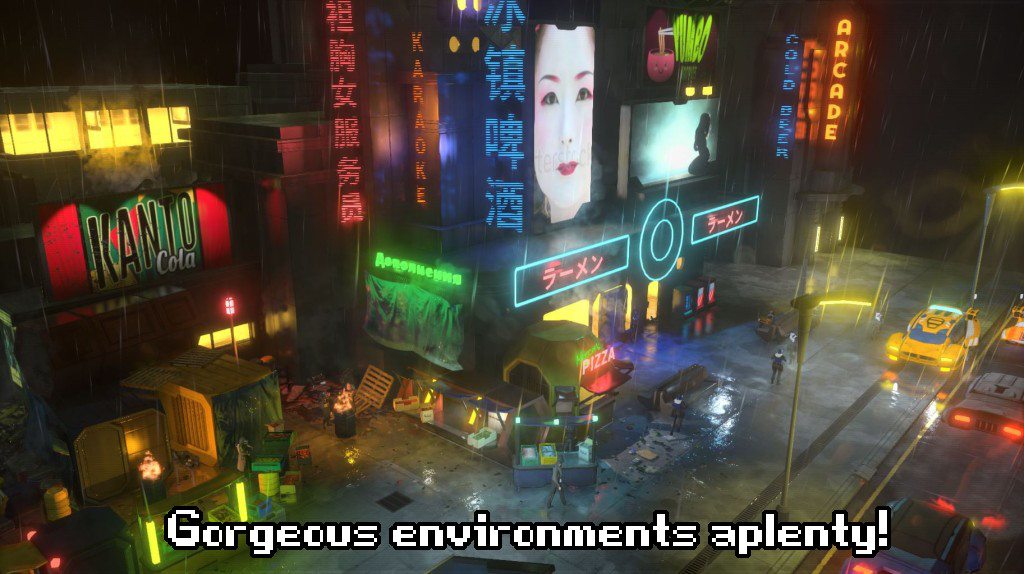 The team starts out with bare-bones equipment. Your Medic and Hacker don’t even have guns. One of the greatest joys I have in this game is scavenging gear to outfit my squad, and even finding squad members to add more firepower. It’s generally wise to take a look around before blitzing into an objective, luckily the environment is actually fun to delve into! Lead your boys down a seedy alley only to be jumped by a crooked cop? My kind of game for sure. It reminds me of XCOM, but the cover and firing system is completely free from any horrible grids or lengthy turns of moving one player at a time. The story (or what I can make of it so far) is along the lines of Deus Ex, with mega-corporations running the planet and oppressing cultural and political dissidence. Super hard to imagine right? Maybe not. 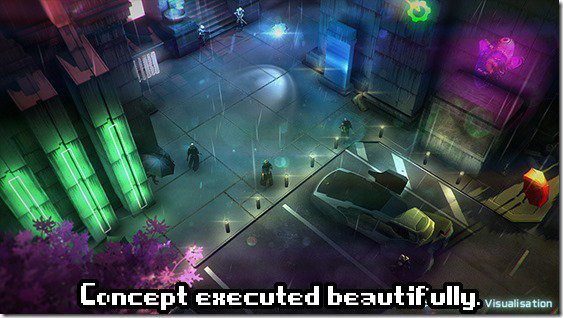 The thing that probably draws me the most into this game isn’t the political intrigue, or nice visuals… No, the thing I like the most is the amount of customization and replayability available. You’re able to kill everyone in a corporation, or you can simply drain away their assets. You can outfit your squad for stealth or combat, you can go about equipping them any way you like, from kidnapping doctors to bribing scientists to stealing a military base password. You can move about the city to almost anywhere you please, and complete your missions in any order. Have I talked about the city yet? Oh my GOD, the city. It’s not quite GTA, but by the time there is an actual release, I expect they will get damn close. There is hustle and bustle during the day, while gangs roam the streets at night. It even goes beyond the GTA level of detail in some aspects, because things like power and finances are transferred from one district to the next, and all this information can be used to give you a leg-up on whatever mission you decide to do next. 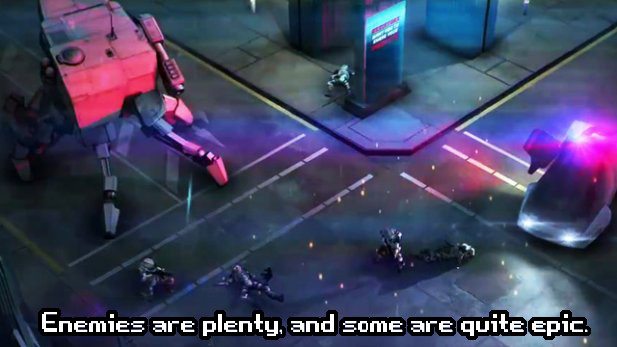 This is supposed to be the paragraph where I explain the cons after 3 paragraphs of pros… And nitpicking a game that brings me so much joy, may cause some amount of physical pain, but it must be done. As an early access alpha, I expect bugs… I can let most of them slide, but fixing people falling through the planet seems to be an utmost priority. Even just killing them after they get below a certain height so they could respawn would be a nice temporary fix. As it stands now, they will be falling forever. The game could also use a bit of polish, which is again forgiveable. The game doesn’t feel very optimized, and sometimes there is a bit of lag when an agent plans out an extra-long path or respawns. I can overlook all these flaws because it’s still in Alpha, and because of the bliss I get from executing a successful mission. I hope this game will get the recognition it deserves, because it seriously puts XCOM to shame. Seems to me like 5Lives Studios can call Satellite Reign a successful mission of their own.

Final Score: 8/10 for gameplay, graphics, and replayability. 10/10 with more polish/optimization.

Satellite Reign will be released on Steam Early Access December 11, 2014