MMORPGs aren’t a booming genre like they once were. The glory days of raiding have passed, and though you can still find it if you look, I believe most people have noticed the time and money-sink that they usually turn into. Sometimes I do miss those days, I spent 7 years in World of Warcraft, so it’s hard not to look back fondly… There were some great PvP moments that make me wish I had been youtubing back then, but overall the stress of not getting that drop you “need” detracts a lot from the pure joy of the game. This is what makes It’s A Wipe so ingenious… You still get to enjoy the feeling of an MMO-raid, but you aren’t going to rip your hair out if something for your class doesn’t drop this week. Herding around your team of 10 to try and defeat a raid boss is harder than it sounds, because even though you’re supposed to be in control, this simulates a real life raid by having people go AFK to check their emails… Sometimes missing a heal when it’s most critical. Obviously the humor is there, the concept is interesting… But there are some fundamental flaws, let’s get into that while we look at It’s A Wipe. 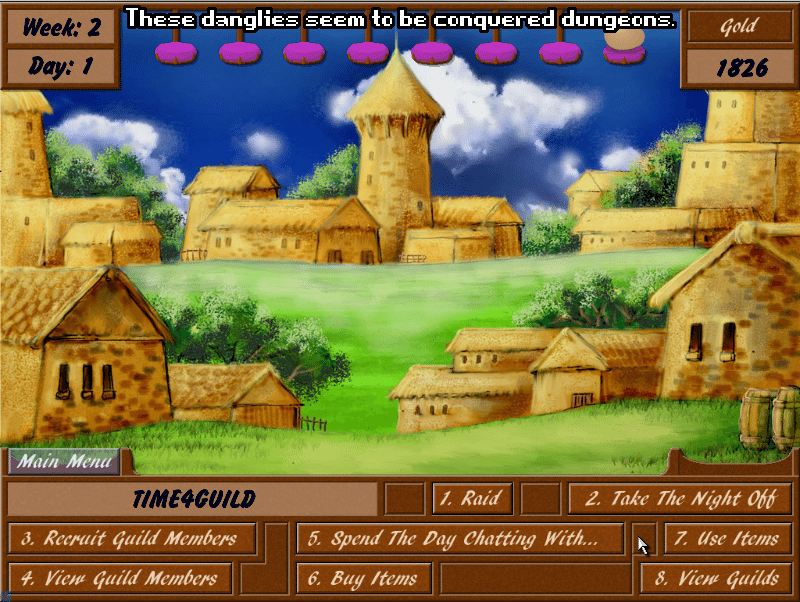 There are nine dungeons in this game, which all offer their own challenges, and will require different strategies to beat. If you’re used to managing a raid, setting up primary tanks and target order shouldn’t be a problem. The real strategy comes once the fight starts, since you’ll need to realize when to change gears before it’s too late. Did the mob get an early crit? Spam heals before he drops the tank! Is AoE damage overpowering your casters? Maybe it’s time to retreat and bring an extra druid. The recruiting system has potential, but could use some work. Currently the only skill I’ve seen is Battle Rez, and the only perks Alchemy and Herbalism (both serving the same function). It could get quite interesting to have a few more in the mix, or even just a couple guys with no skills having upgraded gear available. As it stands though, sorta bare-bones. There are a variety of items in the shop, but you’ll honestly only be buying the potions unless you don’t feel bad about embezzling guild money into a sweet mount or companion pet, which isn’t visible. 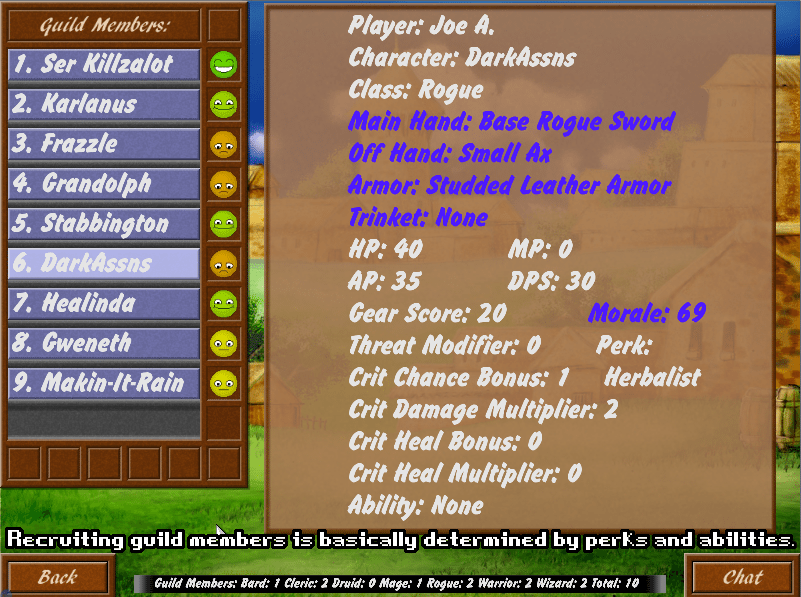 Besides fighting the bosses, and people derping away in combat, you will be forced to worry about the morale of your guild. You know that rogue that you dragged through three dungeons? Well, he’s upset about the one drop he didn’t get, so he’s decided to leave the guild. I know, I know… It was you that geared him up. I’m sure you’ll have no problem gearing up another one right? Riiiight? Well, yes I do. Even the players who say they don’t care about loot under the personality tab secretly care deep down. Some days you will need to while away some hours chatting with your guild members, listening to their problems, and boosting their morale… This will upset guild members who “demand attention” under the personality tab, though. The entire game presents an intricate balance that I find quite intriguing, and quite difficult… Even on the “normal” setting. But then, when was a raid (or guild management) ever supposed to be easy? 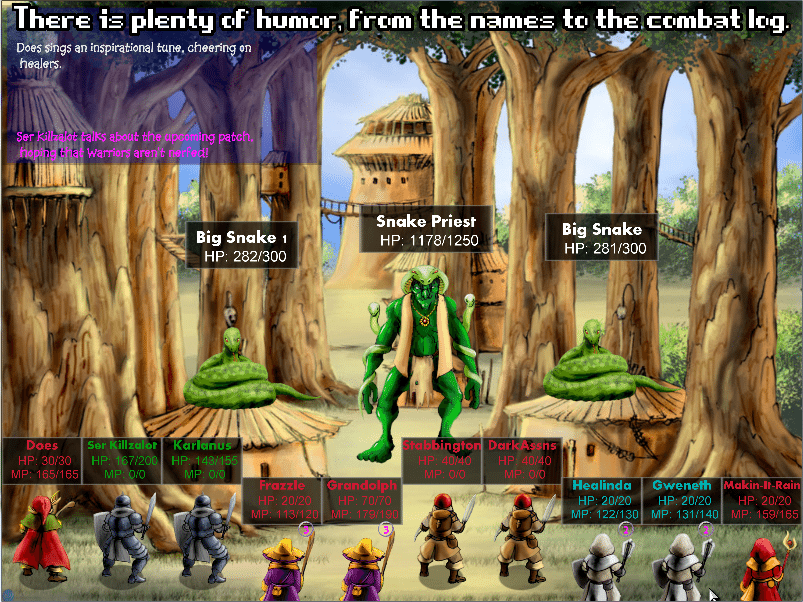 On the downside, there is very little actual gameplay to speak of. It’s a great game for when I don’t want to really “play” a video game… But don’t feel like vegging out on Netflix either. You set up the roles for the guild, and unless something goes terribly you’ll usually just be clicking “Stick With The Plan”. The humor isn’t engaging enough to hold me during EVERY round of combat, so sometimes people will change roles or switch rows without my noticing… Easily leading to a wipe if not corrected. The art style, while nice-looking, is not animated much, nor are any upgrades reflected on the character model aside from increasing their stats. It’s an interesting game that lacks a few key fundamentals during execution. The raids are well-designed though, and switching up classes between playthroughs offers some nice replayability. It can certainly scratch that itch I didn’t remember I had, but there is lots of room for improvement, and while it won’t be everyone’s cup of tea, the price is low enough that I’d say it’s worth giving it a chance.

Summary: A MMO guild-management strategy game with plenty of potential.

Final Score: 6/10 for raid designs and replayability. 8/10 with more perks/abilites.