If anybody asks me “Are video games art?” ever again… I won’t say a word, I won’t even resort to violence… I will simply show them a video of Deer God. They should’ve called it “Dear God” because the game is breathtakingly gorgeous during the day, while displaying a less vibrant gracefulness at night. The game is primarily a platformer, and still in Early Access, but the controls are smooth and it is a real pleasure to leap through the forests while avoiding cougars, hunters, and the occasional pitfall trap. To sweeten the deal even more, Deer God is also available for smartphones, so my social life can officially go out the window. But is endless platforming in a roguelike wonderland really enough to make a complete and fufilling game? Will we soon grow bored of our springing Cervidae? Let’s find out, as we fawn over… Deer God. 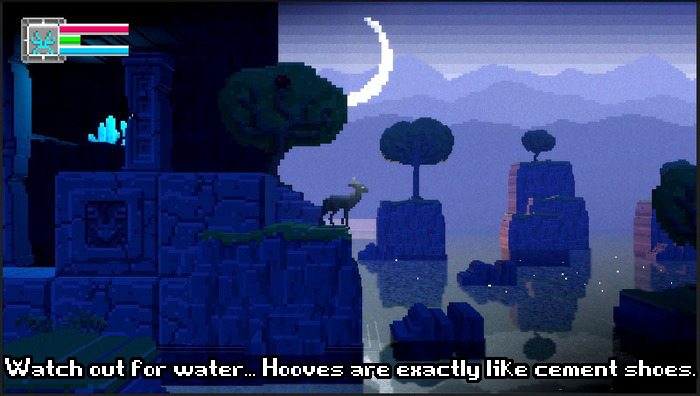 After a brief cinematic you spawn, as a little baybeh deer, your mom will tell you to press down to interact with characters and eat things. Shortly after, you learn the Double Jump and you’ll be off leaping through the forests. The first thing you’ll probably notice is the lighting effects… They are absolutely fantastic. The soundtrack stays minimal, which matches the serenity of the forest, and lets you hear the clippity-clopping of your little deer’s hooves. There are also a nice variety of environments that you can enjoy while you prove your worth as the Forrest Gump of the deer world.  Enemies will spawn and try to eat you, but you will also meet other deer. You need to mate in order to save the game, but talking to a lovely lady can sometimes summon the ire of their buck. All these mechanics come together beautifully to form a game that doesn’t really feel like Early Access at all, aside from a few bugs. 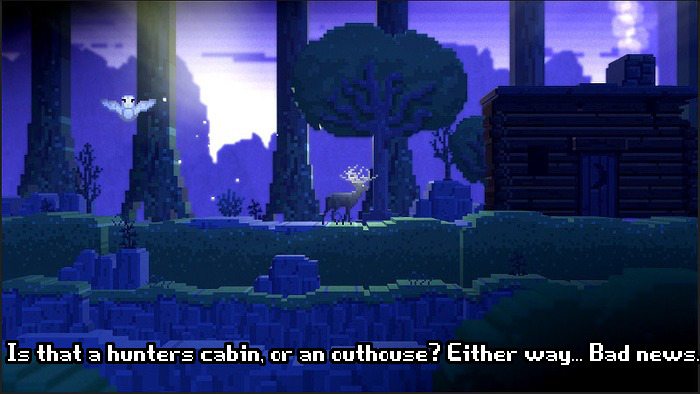 You may notice that from the 2nd picture to the first, I’ve sprouted a lovely set of antlers. Watching the progression of your little deer from fawn to buck is one of the things that draws me most into this game. It isn’t about getting the furthest, or unlocking the most skills… It’s all about making a set of antlers that will intimidate your foes and make the ladies go wild. Ok, well… You do need to unlock the skills in order to progress. Skills are unlocked via a deer statue which can be activated with a bit of puzzling that involved pushing blocks onto beams of light. The first few are cake, but they do get significantly harder at a rather nice (read: quick) pace. If your antlers and new skills don’t scare off your rivals, you can mash the spacebar to give them a headbutt, but this will consume your blue mana bar. If they drop your red health bar, you can run away using the yellow stamina bar… Just remember to eat lots of shrubbery to refill it. This is obviously a game with a vision, and the danger, interaction, and platforming blend together to an almost perfect mix. Almost. 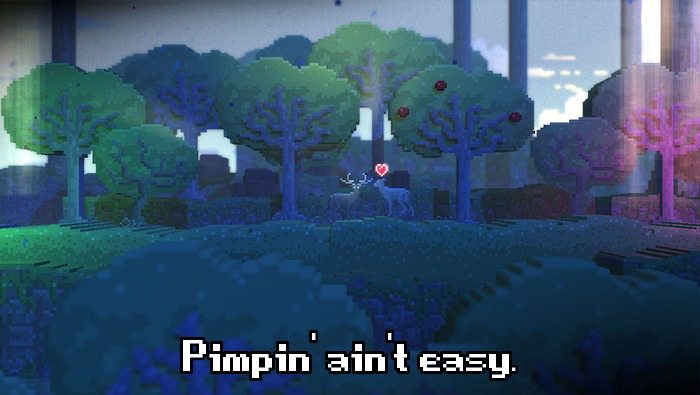 As much as I love this game, it is my duty as a reviewer to find the nitpicky things… So we’ll start with water. Some water is ok to run through, presumably these are just puddles. Some puddles will drown you instantly, because they are actually ponds. How can you differentiate which is which? Well.. You can’t really. When you’re hitting on a lady deer and have a stag slam into you out of nowhere, that is a fun element of surprise… Water in Deer God is just cruel. The game can also get a bit monotonous after extended play. I touched on at the beginning of this review, whether or not platforming was enough to make an entire game stand on its own, and my summation is that hell yes it does. Great job, Deer God. Crescent Moon Studios is on my radar for a good long time to come.

Final Score: 8/10 for gameplay, graphics, and replayability. 10/10 with another mechanic to add to platforming.

Deer God was put on Steam Early Access on December 2, 2014