Review: Why So Evil?

Very often I’ve asked myself why I have such an addiction to “rage” games. I suppose because being challenged to a point of frustration by a video game leads to a greater sense of accomplishment when you are finally able to conquer it. It’s also what attracts me to rogue-likes. When it’s always do or die, you need to be in top form in order to even get close to the finish. Why So Evil? wants to be both of these, but ends up coming close to neither. The game opens to a startup launcher that allows you to pick your resolution/graphics, a “windowed” checkbox, and a controls tab. The launcher is my favorite part of this game. Almost nothing in the game feels as well made as the launcher. I could end the review there, but my masochism won’t let me, so let’s look at this game a bit more in-depth, and ask ourselves the question, Why So Awful? 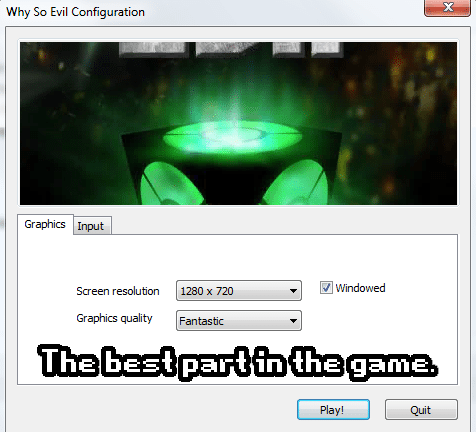 The game is launched without a menu. No tutorial, no further options, just a room with a green cube, a blue cube, a bouncing red cube, and a horrible-looking default Unity UI. Now, I understand the difference between a AAA title and something from an indie studio… But to leave the default buttons and text on a UI that can’t be turned off? Pure laziness. Anyways, WASD appears on the screen, and you will find that you are the green cube. If you are intuitive, you will avoid the red cube and head towards the blue. If you’re curious you will test the red one. This sends you back to stage one. Which you were already on. Okay, no harm, no foul. We now know that red cubes can kill us. So you roll past the red cube, everything lights on “fire”… (Which, for a game that touts its realistic weather effects, look exceptionally unfinished) and in that horrible default text it asks “Are You Ready For Hell?” Whereupon touching the blue cube, you will be forced to complete the first stage for a third time. Leading me to believe that the blue cube isn’t my friend at all. Everything in this game seems to kill me, lets be smart, shut it off, 3evil5me. Am I ready for hell? Probably. But that still didn’t prepare me for this game. 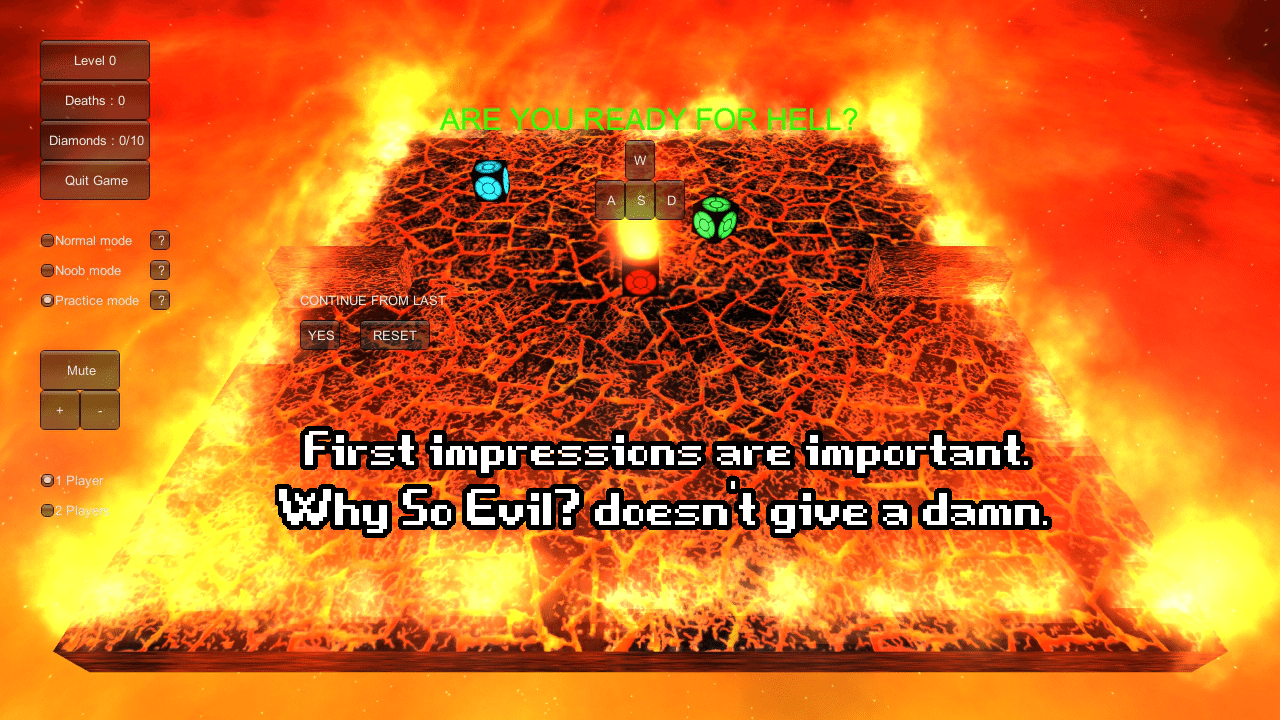 The first few stages aren’t really hard, the hardest thing about them being getting used to the wonky physics of this game. Sometimes moving left or right will cause you to roll, but it usually doesn’t… This leads to a game that feels clunky and cumbersome instead of the death-defying action game it advertises itself as. Around level five or six, the game will start punishing you for making it to new levels. You’re placed in a big blank level, with the exit nowhere in sight, and suddenly platforms start flying every which way to knock you off the edge of the stage… If it were a well made game, you might be able to roll toward the edge of the platform and save yourself. Instead, you’ll usually end up stuck inside of it and swept off the edge. Then you get to go back to level one again, and play through 20 stages, all so you can get a few more seconds learning which way the platforms come from on that last stage you died at. Are we having fun yet? Yaaawn. This is simply a glorified memorization game, and I understand it calls itself evil, but I think the most evil thing about this game is its lack of effort. 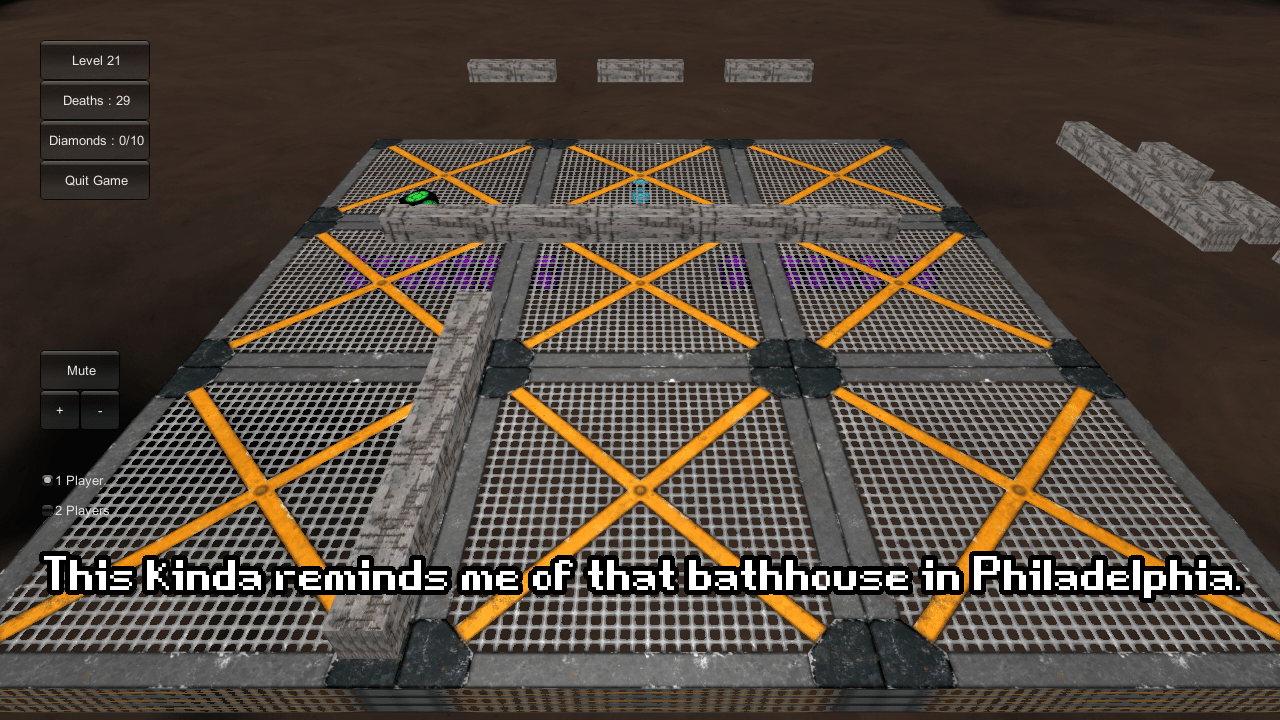 Even if you can undergo the kind of repetition that Why So Evil? will force upon you, you will inevitably ask yourself “Why?” There is no sense of progression… There’s no sense of enjoyment. There’s no sense of accomplishment. The only thing this game was able to deliver was artificial difficulty, and monotony. I think I gave this game a fair shake. Its not as if I dislike this sort of game, I raved to my friends about EDGE. But this lacks any of the inspiration EDGE had. It physically pained me to see that they thought this game was good enough to not require any updating (as stated on their store page), because in order for this game to be worth any amount of money it will require quite an overhaul. It isn’t all doom and gloom though, some of the weather effects are done quite well… Well, the rain looks good. The fog is also passable. The soundtrack might also be enjoyable for some people too, if you enjoy techno or house. Also on a positive note, most things about the game are “useable”, and the level designs that aren’t unfair can sometimes be quite clever, but to me it isn’t worth the pain because there is no reward except for more pain. If you need to fulfill some masochistic tendencies, pick this game up… Otherwise, buggy physics and unfair level design will drive you off the deep end. 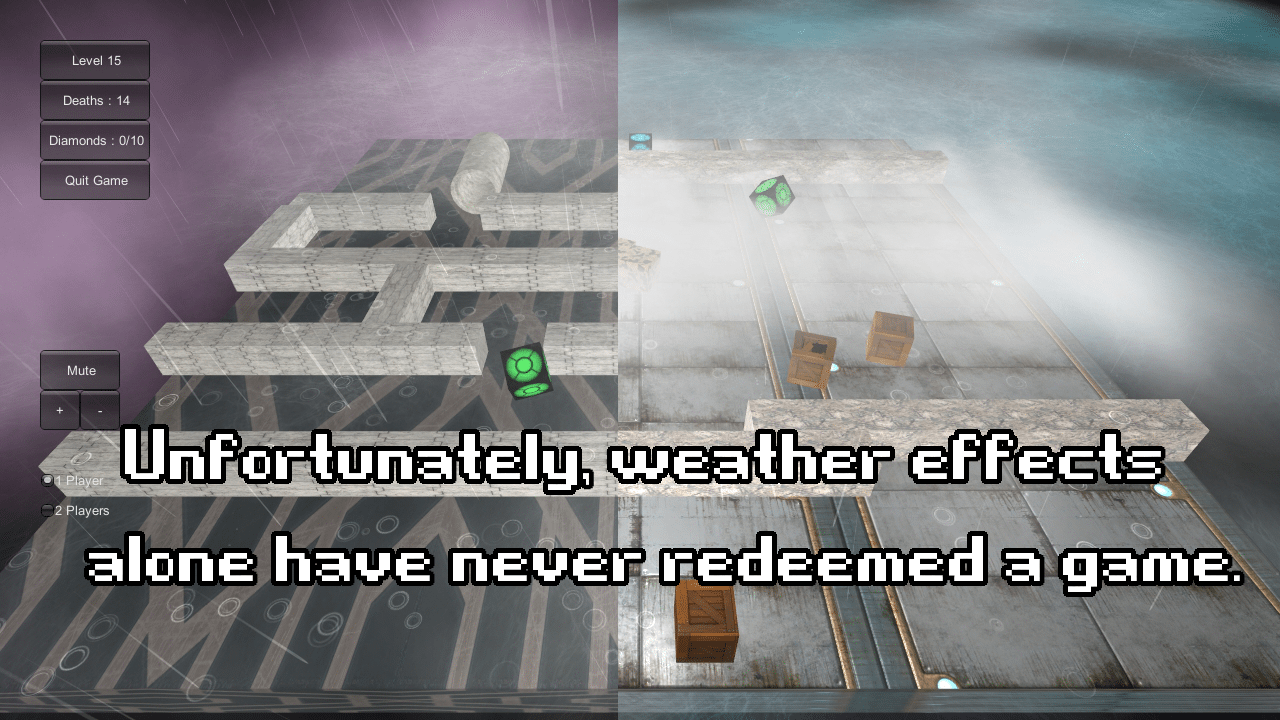 Summary: A neverending masochistic “adventure” that tests the limits of human endurance.

Final Score: 4/10 for weather and soundtrack. Could be brought up to 8/10 with major physics/level design overhauls.

Why So Evil? was made available on the Steam store November 10th, 2014.