Hatred has caused quite a few waves within the mainstream media. People have called it everything from a political statement to absolute proof of the degeneration of society. While there were a few cinematic executions that I found pretty cringe-worthy, most of the game is spent too far in the sky to discern much of the destruction happening down in the isometric hellscape that “The Antagonist” is intent on creating. Hatred certainly has its strong points, such as destructible environments. However, it also falls short on basic things like dialogue. Some lines are so cheese-covered that I’m going to need some nachos before finishing this review. The variety of objectives is lackluster, but if you go into Hatred with the idea that it really is just a brainless isometric shooter, it can easily work its charm on you. Is it worth the massive amount of hype? Let’s take a deeper look at Hatred. 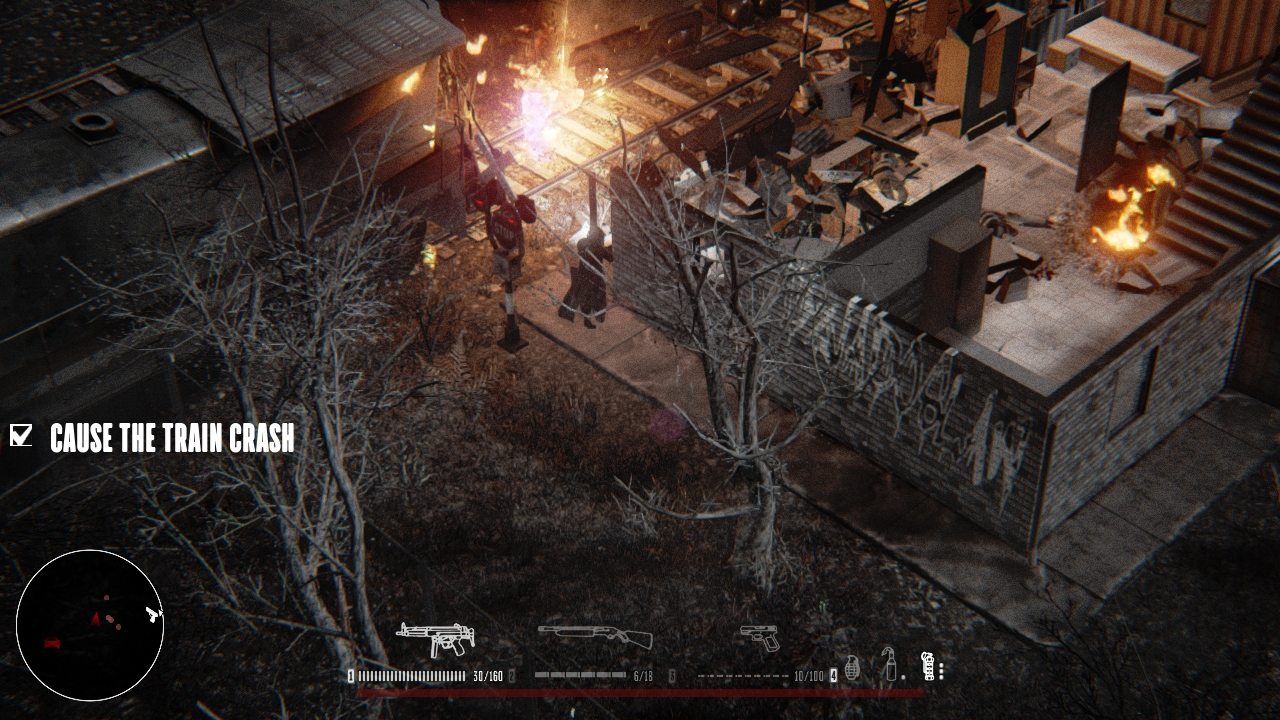 The first thing you will notice as you burst into the streets will probably be the smooth gunplay, followed closely by the fact that AI civilians are extremely stupid. As you fire your assault rifle many will flee, some will cower, and a few will run directly towards the barrel of your weapon. This is a bit of a positive note, since the only way to recover health is to execute the injured, and the police are extremely determined to end your killing spree. As you advance through the game you will take down local cops, SWAT teams, and the army. There are only five weapons and three grenades to pick from unfortunately, and this along with lack of enemy variety hurts the replayability. I’d love to face down a tank with an RPG, but it never happened. Antagonist, I am disappoint. Hatred does have its fair share of clipping and optimization problems. The plot and execution are far from being innovative. The Antagonist is the antithesis of likeable or believable, but somehow even with its blemishes, underneath is a wonderfully built game. 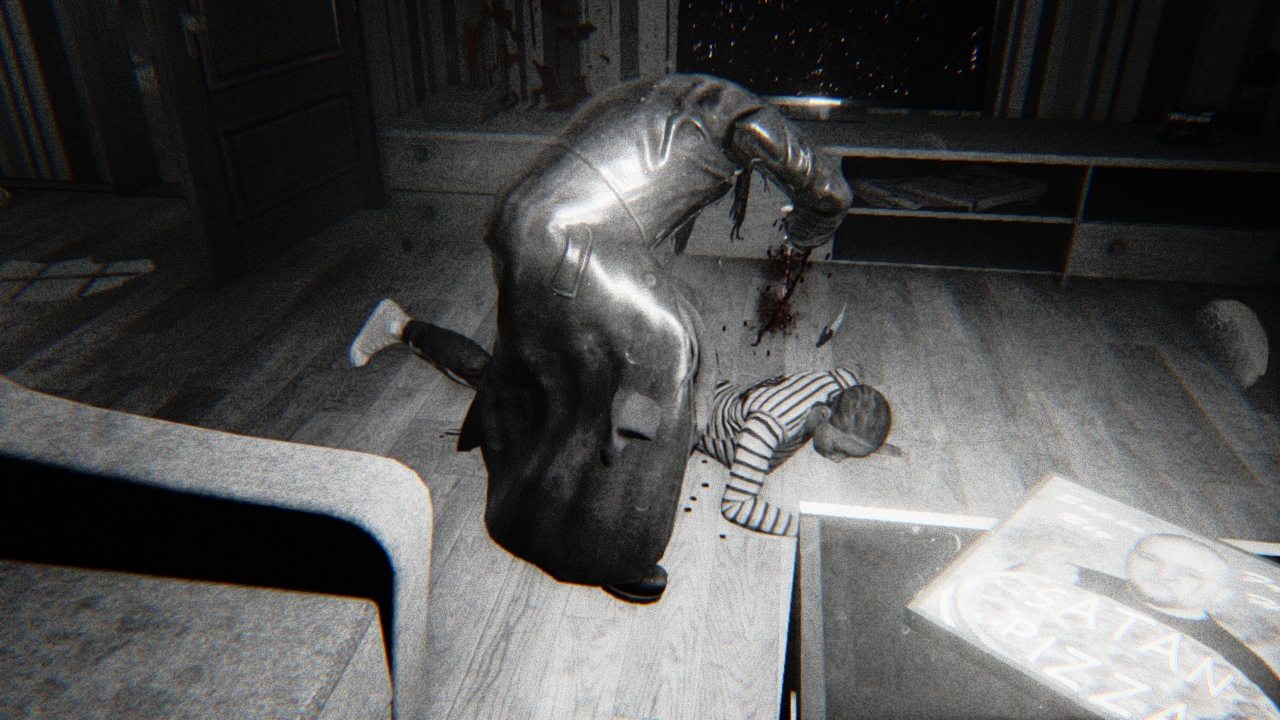 The monochrome aesthetic is extremely effective here. Red and blue are the only real colors, which keeps Hatred from feeling too real. This might be a negative for some, for me it’s a definite positive. Sounds are extremely realistic, from firing a gun to pleas for mercy. The lines for The Antagonist are cheesy, but delivered well. There’s not a lot a voice actor can do with a script like this one. The game is extremely difficult even on normal mode, but don’t fret, as you get a respawn for completing side-objectives. While these do help a ton, if you die without any you will be forced to start the entire level over. I enjoy the level design a whole lot, and if you don’t like something in the level, you can simply blow most of it up! Grenading your way through the side of a building and opening fire on anyone inside is extremely gratifying. 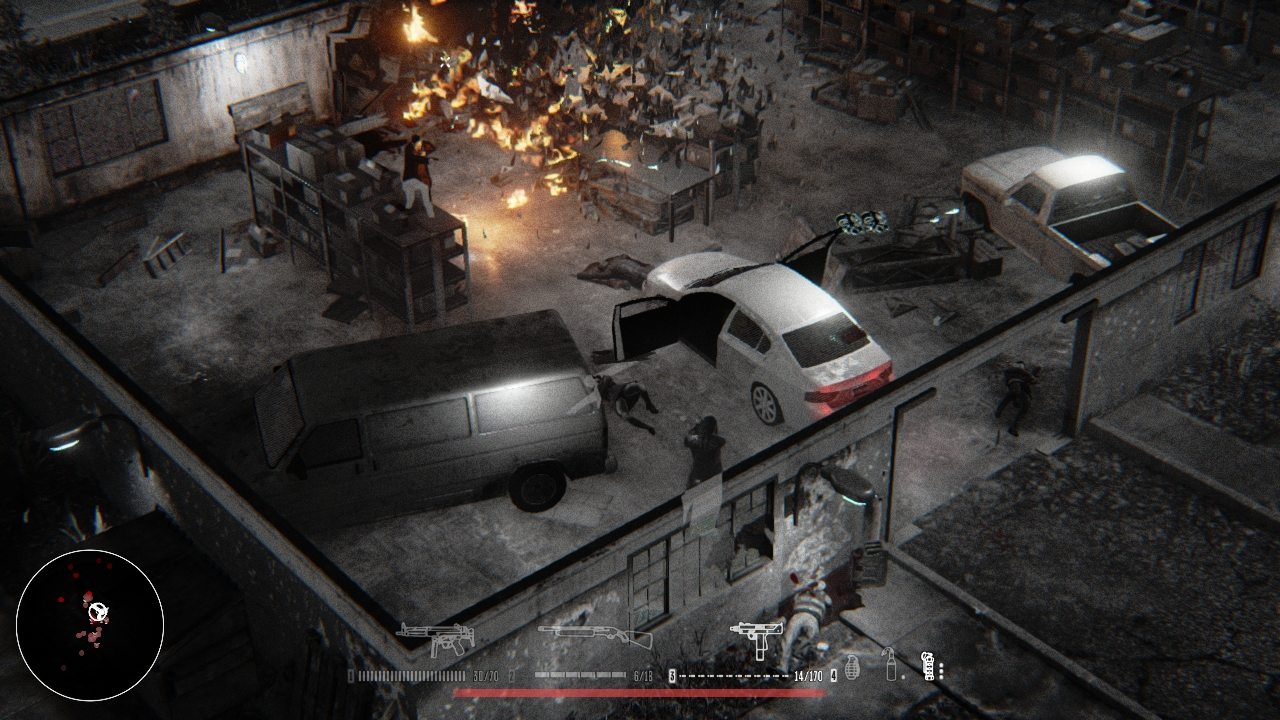 I won’t attempt to take the supposed moral high-ground, as I play games with a similar amount of violence almost daily. Hotline Miami, Grand Theft Auto, Postal… Hell, even the fatalities in Mortal Kombat are far more gory than anything this game offers. If you feel bad about shooting civilians, let the police shoot you without reason (and they will) so you can feel justified. The only reason this game was awarded an AO rating and effectually ostracized from console gamers is simply due to lack of corporate ties, and maybe some marketing that was a bit too good. I don’t hesitate to say that Hatred doesn’t live up to the hype, but that doesn’t make it a bad game by any means. Firefights are a lot of fun, especially when you keep shooting the door jamb and expanding the hole. Overall Hatred is worth a look for anyone who enjoys isometric shooters and a touch of gore. Big thanks to Destructive Creations for the review copy, I hope you guys will continue to get under the skin of the mainstream gaming industry for a long time to come.

Final Score: 71/100 for aesthetic, difficulty, and edge. So much edge.

Summary: Pretty and brutal isometric shooter, based around “The Antagonist”, who decides to create his solution to overpopulation.

Get 4 free games on Itch.io this weekend

FREE GAME: Leisure Suit Larry 6 – Shape Up Or Slip Out