Hotline Miami holds an extremely special place in my heart. It is the first game that compelled me to tell others how fantastic it is, and the reason I started my Lets Play channel. In the past year, some clever marketing by Devolver Digital has revved up the anticipation for Hotline Miami 2 beyond belief. It went from a nicely polished but largely unknown gorefest to a game nearing “mainstream” success while retaining the edge that is quite literally shaping the series. The game wasn’t just carried by marketing of course, the slick controls serve the top-down shooter/stealth/brawler hybrid extremely well. As I danced my way through the stages, I found myself painting like Pollock, on every inch of screen available. Punch a guy in the head, use his gun until it’s spent, fling said gun through a window and kill another dude with it. Glorious. Dance the dance of death with me while I dig a little deeper into Hotline Miami 2. 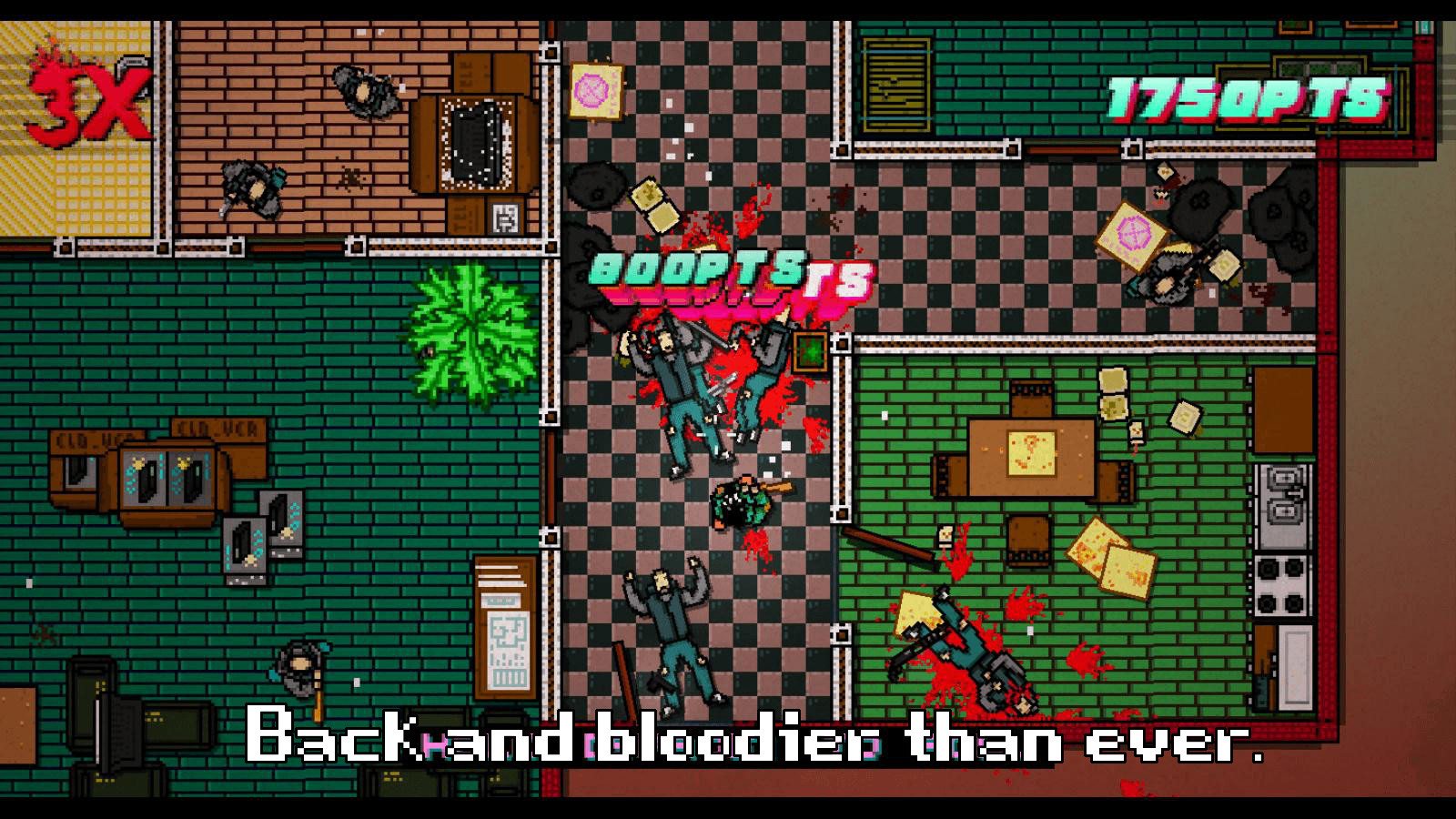 The best part about both games is undoubtedly the music. I could write for days on how well the pulsing synth and kicking bass positively accentuates the glorious neon frenzy that is unfolding on the screen. Aside from fantastic electro, Hotline Miami 2 features a number of ambient tracks during the dialogue scenes. The ambient music is generally rather eerie, and while I don’t particularly enjoy them as much as some of the more banging tracks, they do serve the aesthetic of a mask-wearing psychopath extremely well. The level of detail in this game is as impressive as ever too. My mind was absolutely blown when I walked by a rack of clothing and it spun as I brushed by it. It doesn’t affect anything about the gameplay, it’s purely meant to immerse you deeper and such small details carry the game a very long way in that regard. 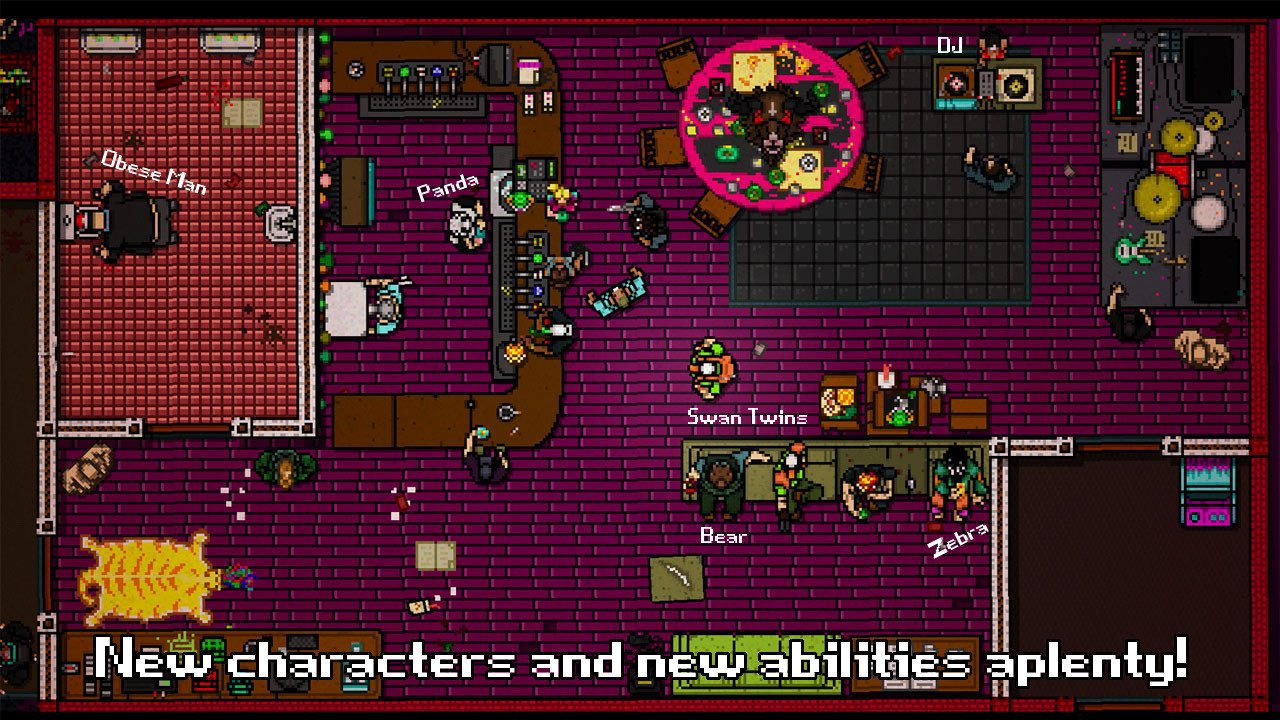 The original Hotline Miami offered masks which had a variety of effects from augmenting your walking speed to spawning you with a weapon. Hotline Miami 2 takes this mechanic to a whole new extreme with a massive load of new masks and abilities. Some do seem a bit gimmicky, such the twin swans who operate as a unit, but overall the slew of new masks to pick from is extremely satisfying. Some masks are inherently better than others, but that was also true in the original game. Then again, what is inherently better for a character who enjoys brawling might not suit a player who prefers an old-fashioned shooting rampage. This freedom is what defined the original Hotline Miami, and unfortunately some of that was stripped away in the sequel. When playing as the swans you aren’t able to pick up any new weapons. Ammo can only be found in specified crates, and this castrates much of the freedom the original offered. 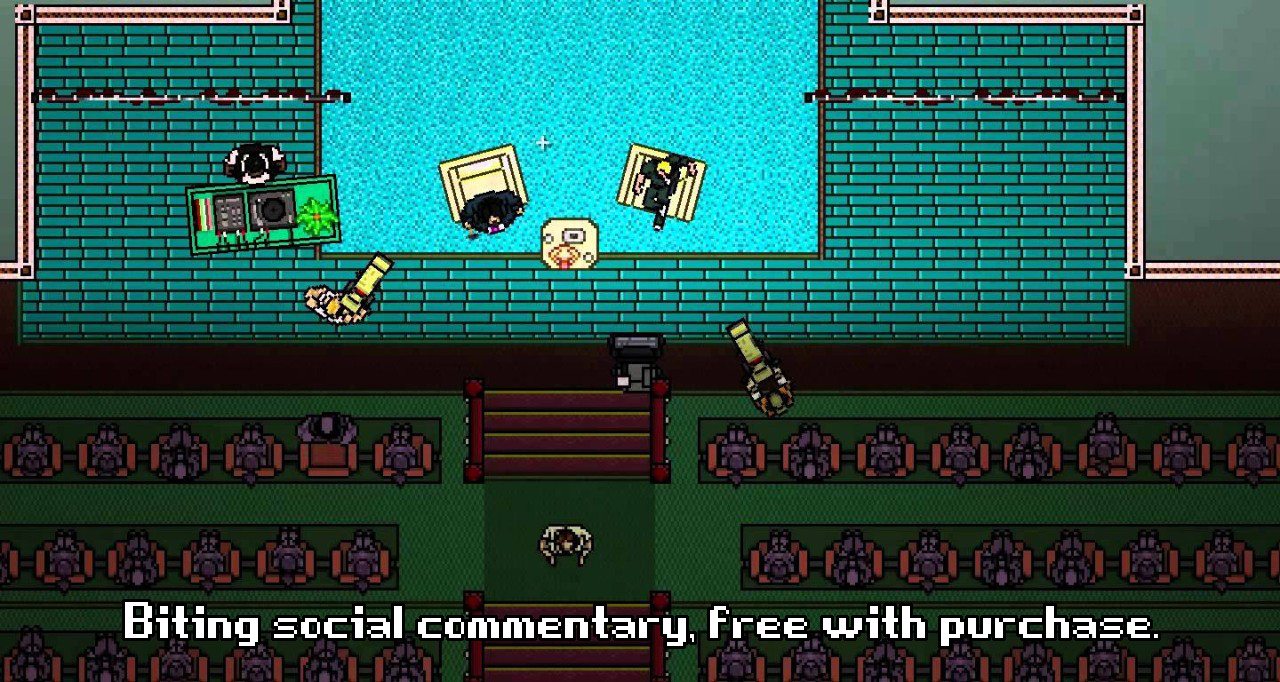 While the gimmicks involved with a few of the masks seems to be a poor choice, there is very little else to nitpick about this game. Some of the sound effects are a bit generic or repetitive, and the fun factor is knocked down a bit due to the frustrating difficulty. Overall Hotline Miami 2 is a blast to play and will keep me coming back to try and top the global scoreboard for a long time to come. The actual gameplay feels a lot less luck-based than the original installment. The storyline is also much more gripping this time around, though it does Tarantino around an awful lot. There is some controversy over a rape scene that appears in the game, but after stomping a series of five bad guy’s heads like grapes in an old I Love Lucy episode, I didn’t find myself overly phased by it. The entire game is a trip, and one totally worth experience. Just be sure to hide it from your kids.

Hint: At the moment you can get Hotline Miami 2: Wrong Number for $12.95 here