Speedrunning used to be a small genre within the gaming scene. You’d take a game, preferably one with action/platforming aspects, and simply attempt to beat it as quick as possible. Within the past five years, speedrunning has become a genre entirely of its own. While most speedrunning games still harken back to their platforming and action roots, they usually also feature a timer, a time to beat, and enough speed to make a cracked out Sonic drinking Red Bull get jealous. JumpJet Rex exemplifies speed. Paired with a colorful aesthetic and a bevy of extremely varied levels, you will be shaving seconds with pleasure in an attempt to see what comes next. Will JumpJet Rex speed it’s way into your heart, or crash and burn? Let’s take a closer look at JumpJet Rex. 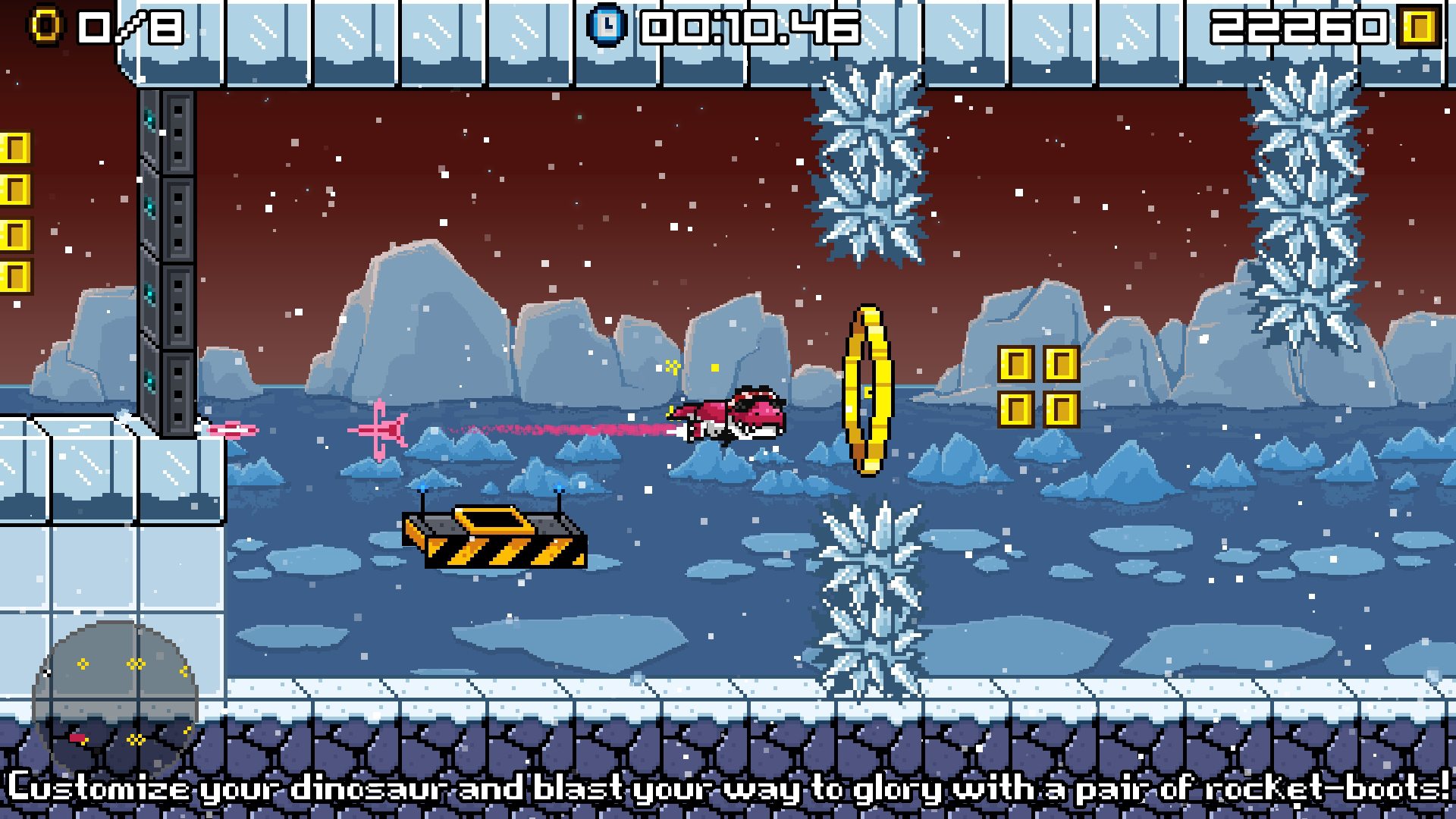 The controls in this game feel extremely smooth. Most people haven’t played as a dinosaur in rocket-boots before, but let me tell you that it’s surprisingly much easier than it sounds. Hitting X will send Rex rocketing in the direction you are currently facing, with reckless abandon. This is the primary ability used to get through stages, along with your levitate ability which is activated with Y. Pressing A will allow an itty-bitty jump, and B will have Rex tuck his legs and butt-slam his way to the ground. You will need to chain all of these abilities effectively in order to avoid enemies, obstacles, and traps in an attempt to reach the end of the stage. Just reaching the end is enough to win a star, but each stage has two additional stars. One awarded for not dying. The other can be won by completing the course under the par time. 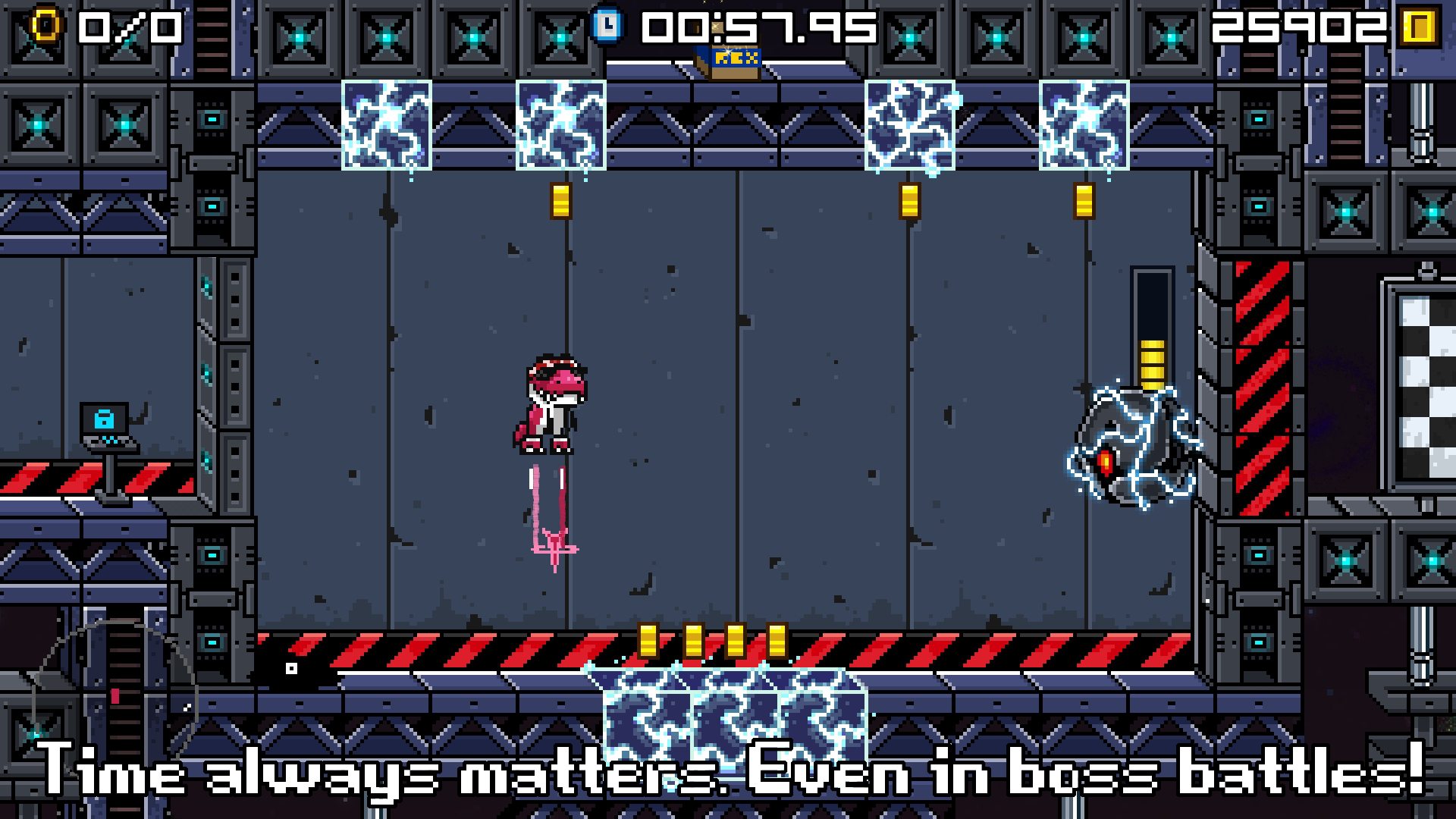 There are also three different game modes, so once you bumble your way through the story mode you can come back again and rage as you attempt to complete the entire game with only three lives. Finally in time attack mode, you can attempt to complete the entire game as quickly as possible and try to dominate the global scoreboard. Your efforts in game are always rewarded, usually with cosmetic upgrades but I can tell that even dinosaurs like to play dress-up. Currency is found in every level and, as with any good game, will usually lead you where you need to go. Level design is varied from arenas to sprawling mazes, and new mechanics (such as breakable blocks) are periodically introduced, which keeps things interesting for the player. As I stated before, the aesthetic is colorful and helps enhance the fun nature of the game. The music is good for the most part, though some tracks do slide into questionable listening material. 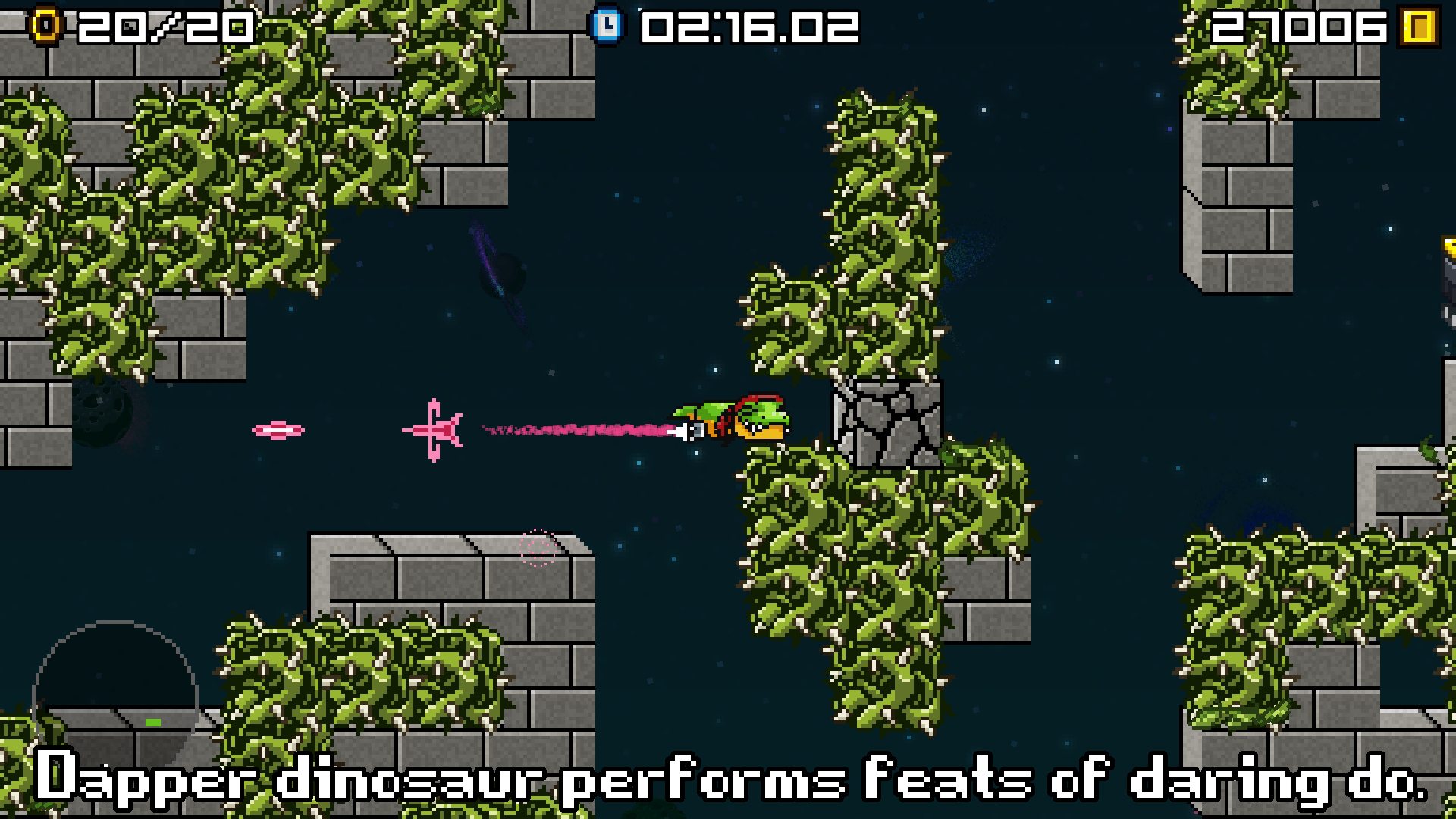 The sound FX get a bit repetitive after an extended period of play, as I’ve found with most speedrunners. The story is also pretty generic and serves basically only to get the game started. Some stages are quite confusing, and you are sure to never get three stars on your first try. That seems to really be about it. There aren’t a lot of negative points to JumpJet Rex, and while it could do with a bit of polish, I think what is offered currently is extremely solid if you’re into fast-paced platforming with a winning aesthetic and a ton of replayability. I’d like to thank TreeFortress Games for providing us with a review copy, and we look forward to seeing more releases of a similar caliber in the very near future.

Verdict: If you enjoy shaving seconds off your time, Jumpjet Rex is a speedrunning treat.

Summary: Speedrunning platformer with tons of customization, and a strict defiance of gravity.