Collectible card games are a recent addition to my list of addictions. A friend telling you to try one is the equivalent of a “free” sample from your local dealer. Once you start Nightbanes, you will be asked select one of three basic decks. Undead have massive attack, and represent my favorite style of play. The nature deck has plenty of healing spells and the ability to keep creatures on their feet. Finally, the abomination deck is full of poisons and minions able to slip past the enemy defenses. Gameplay in Nightbanes is extremely quick. The main reason behind this, is the fact that you are only able to play one card per turn. I’ll expand more on that a little later. Once you pick your basic deck, there are plenty of quests to complete. Quests offer a second and third tier which gets progressively harder. To complete the tiers you will need to complete the quests many, many times. There is also a PvP system with some nice card rewards, and you can even form your own vampire clan. Nightbanes is pretty good for a free to play game, but it isn’t without some shortcomings. Let’s put it all out on the table as we look a little deeper at Nightbanes. 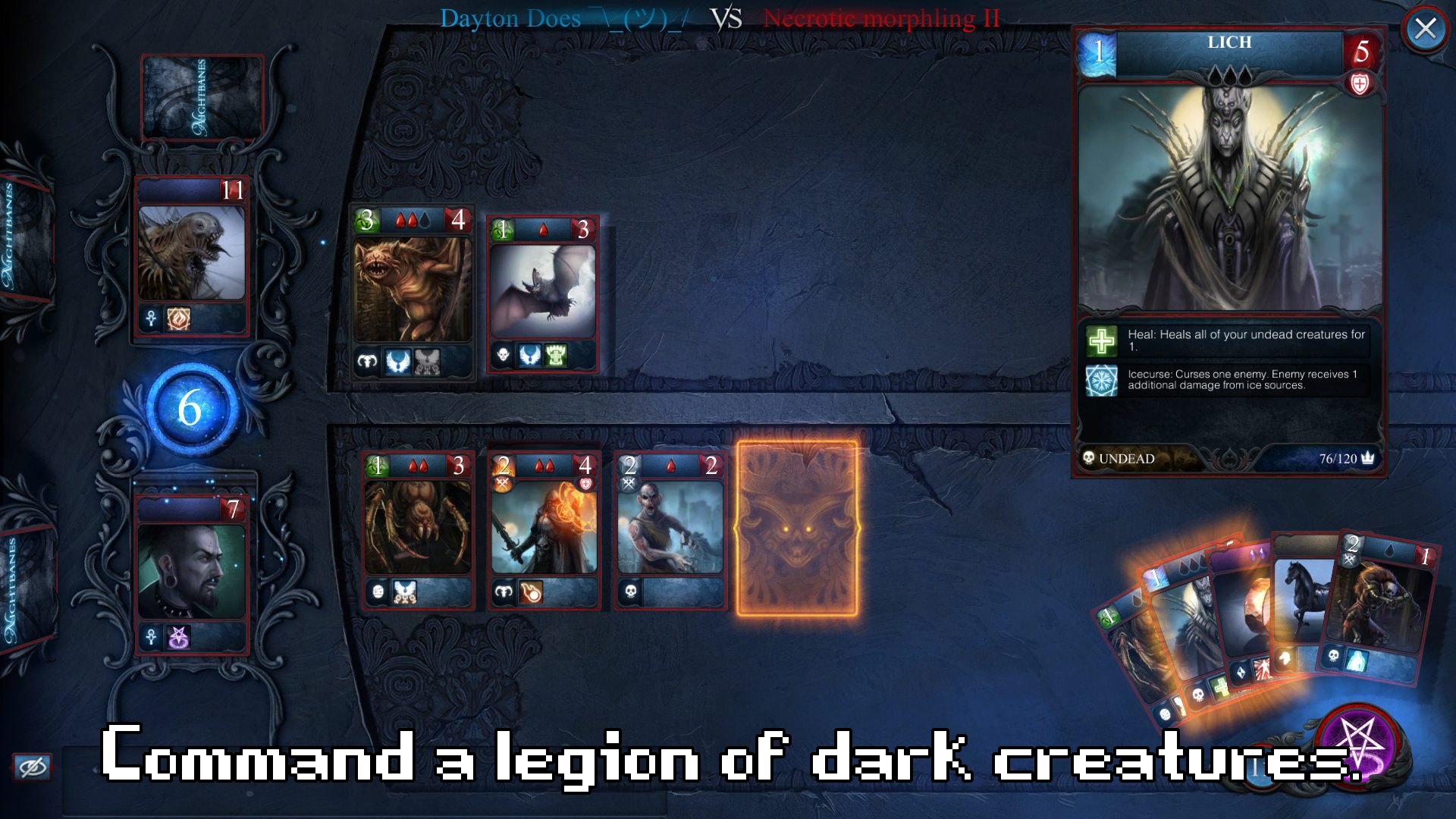 In Nightbanes you play as a vampire lord. Summon the army of your choice and lay the opposing lord to waste. Using only one card per turn is extremely interesting, as you and your opponent will always have a full hand. When a spell or ability is cast, the target is ALWAYS random. This auto-cast, along with the auto-combat that happens as your card is played is an interesting choice that takes some of the strategy out of this strategy card game. Nightbanes still offers a bevy of new mechanics that create some interesting scenarios. Every minion you lay down will fight the minion it is directly facing, bloodlust counters at the top of the card dictate how long it will be until your creature is active. There are also crossed daggers or a shield under the attack/defense indicators that allow certain creeps to equip weapons or armor, if you have them in your deck. Occasionally when opening a pack, you will find a new vampire lord. They all offer different abilities, so collecting the correct one to fit your deck strategy is absolutely vital to your success. Your lord and the enemy lord have a relatively low health total, which makes blitzing an extremely viable strategy. Games are generally very short no matter which strategy you pick though. 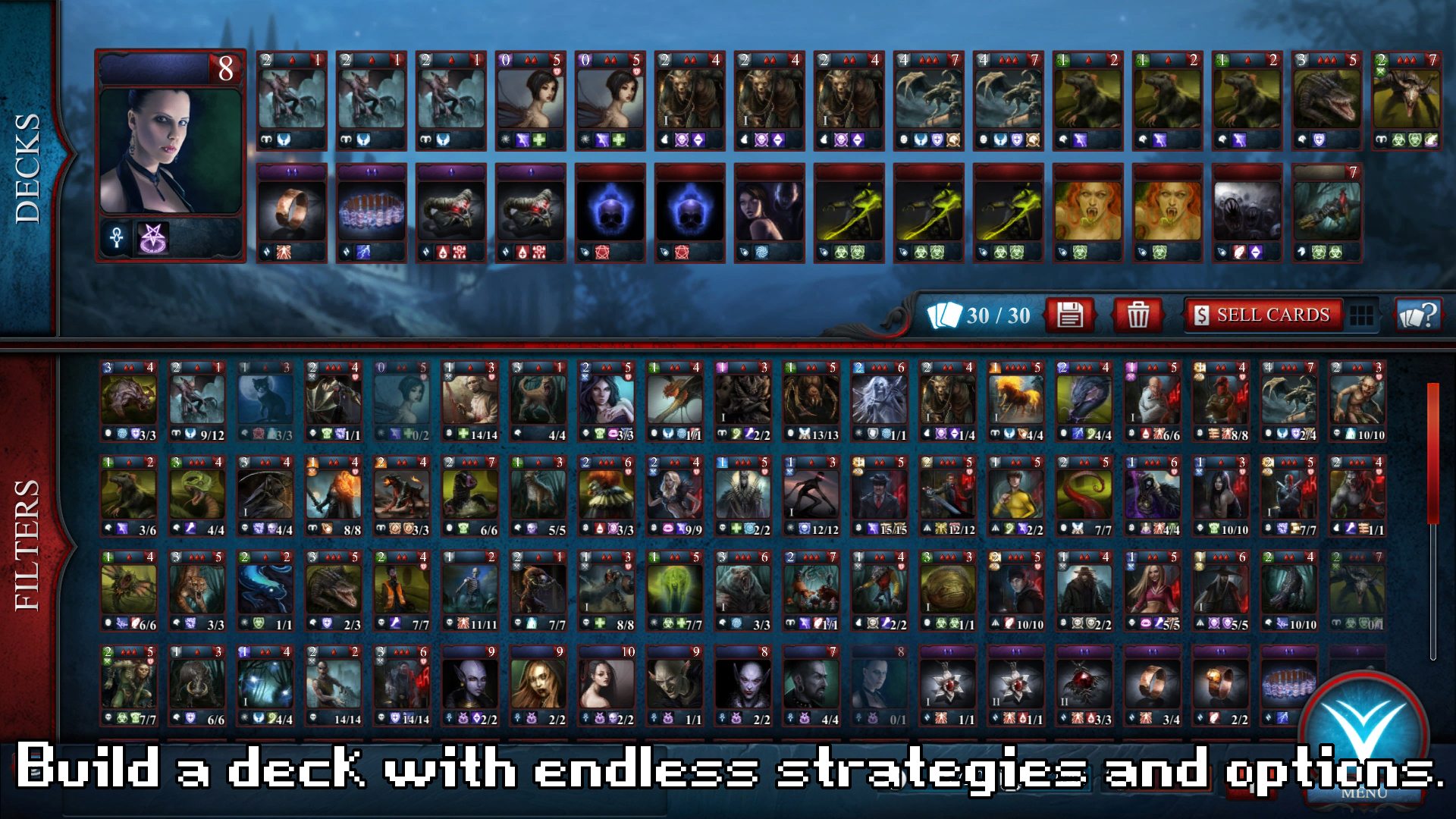 PvP is tough, but AI players tend to give an accurate representation of human opponents, especially once you progress into the deeper tiers in the later levels. Only through rigorous testing will you know if your deck will bring you victory, or fold when under pressure. The sheer amount of cards is extremely impressive. In addition, all cards can be upgraded either by combining it with another card or buy spending the specified currency. Obviously upgrades are extremely important, but unless you have an unlimited amount of time it’s impossible to upgrade them all at once. Fortunately, you can break down cards that you have extras of in order to get more currency and expedite the process a little bit. The card art is extremely nice to look at, but could stand to be bigger. Even with items equipped, there seems to be a lot of unused space. The sound effects are decent, but they are recycled relatively often. Music is much the same story as the sound. There really only seems to be one track in the game, and it is rather ambient. While it isn’t distracting, it doesn’t really serve to pull me in either. 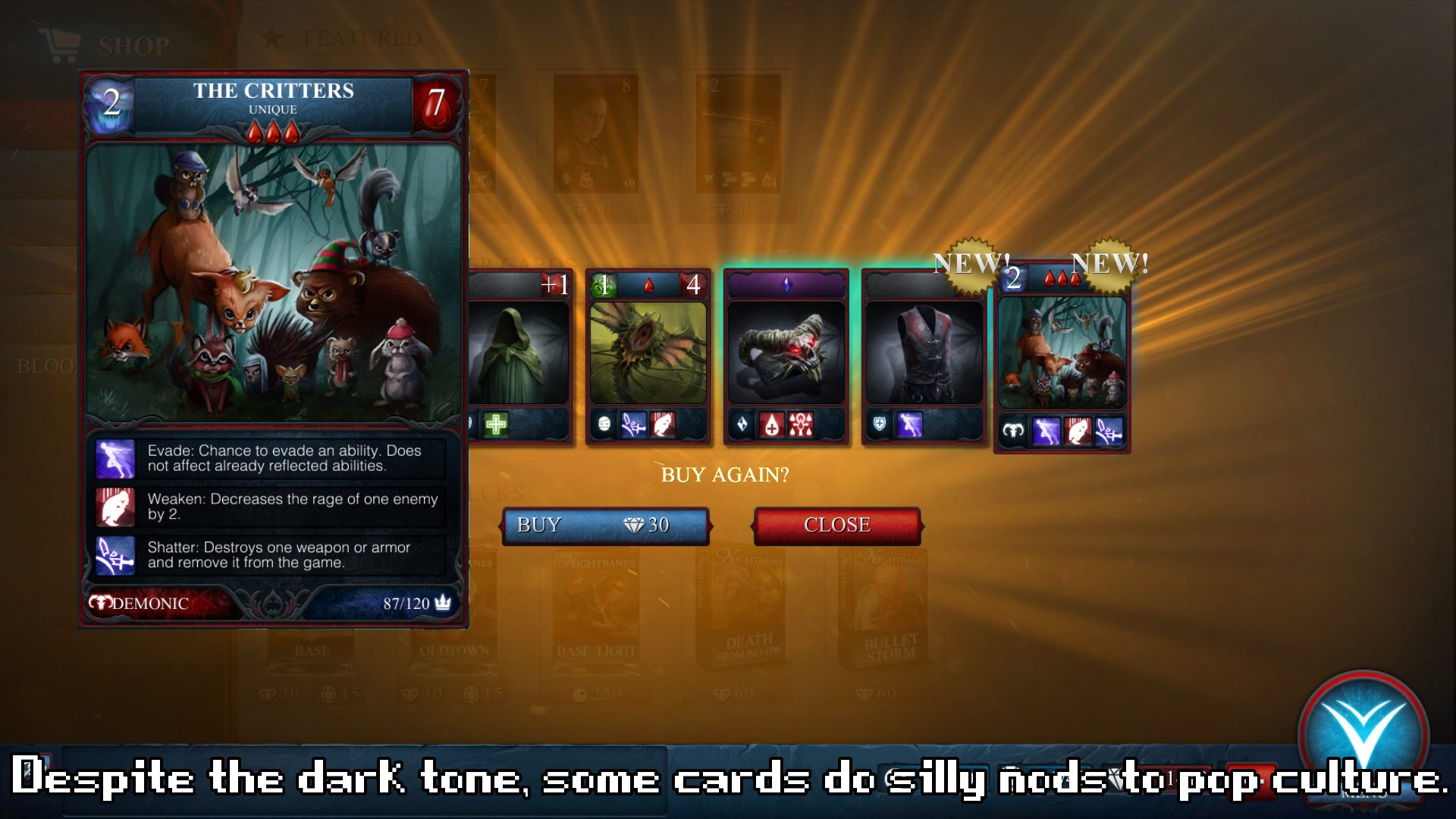 I haven’t spoken about the UI. It really seems like a mess to me. Not because it isn’t laid out well, but because not much is explained and orienting yourself to learn the difference between the three types of currency takes an adjustment period. I also won’t hesitate to say that this game has -some- pay to win aspects. Without paying for currency, you will only be able to net a “good” booster pack every 15 days (the basic booster packs can be bought with the grind-able currency). As compensation, you can blitz through a couple quests and unlock a reward of a couple cards. The quest will even tell you what the rewards are, so when combined with upgrades it is possible to build a deck much more reliably than just buying booster packs. While the game lacks a story aside from “vampire clans dueling (back) to the death”, it is extremely replayable with a deceptively deep amount of strategy. Enemies and levels are varied and always keep you wondering what’s next. Most of the quests fought have a theme that becomes more pronounced as you advance, so you can build a deck to counter those flying gargoyles that your undead army can’t seem to hit. This game is certainly worth a shot if you’re looking for a darker, indie version of Hearthstone. Thanks again Headup Games, keep up the great work!

Summary: Collectible card game with a dark fantasy theme in a modern setting. Easy to learn, difficult to master.