Dungeon-crawling has always been a favorite past-time of mine. Scavenging every inch of some forgotten tomb in hopes of finding treasure that might help me scavenge even deeper. Rogue-likes are also a passion. Permadeath really keeps one on his toes. Combining these two together seems like the perfect marriage, I’ve been screaming for games like this, with such amazing replayability, since I was a child, and developers have answered my cries in absolute droves. The quirky Dungeons of Dredmor, the mathematical Desktop Dungeons, the daring Spelunky… All amazing games that, while similar, have been able to carve out their own niche. Is 1Quest able to do the same? I found it came quite close, but it’s surely not without it’s shortcomings. Without further adieu, let’s take a look at 1Quest. 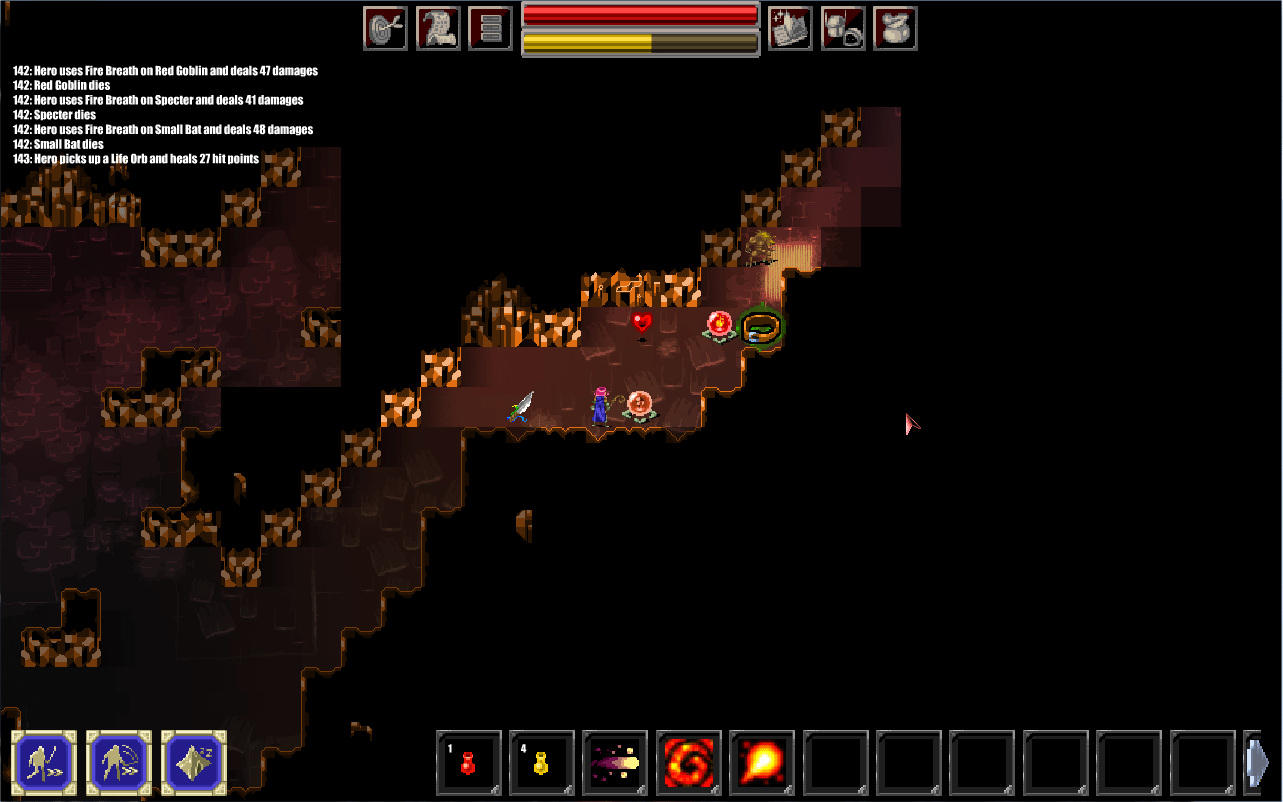 1Quest has a more realistic look than most of its competitors, and it captures the dark story and serious nature of the game quite well. With a story centering around a demonic sacrifice, this ain’t your grandma’s RPG. If she even plays RPGs. She seems more like an FPS gal… Erm, anyways… It is a turn-based RPG, but moves fluidly without a move-counter. Enemies will pursue when you move, but if you stop and go AFK, they will politely wait for you to get back. You can select between 5 races and (currently) 4 classes. There is some obvious synergy, such as the Orc Warrior, but if you feel the need to step up the difficulty, nobody is going to tell you not to roll an Orc Priest. The classes feel quite different during play and will require different strategies to complete the same tasks, which is great for aforementioned replayability. The UI is quite intuitive, but the default control scheme seems like a total mess for the way I tend to place my hands… Luckily you are able to rebind everything to your liking. 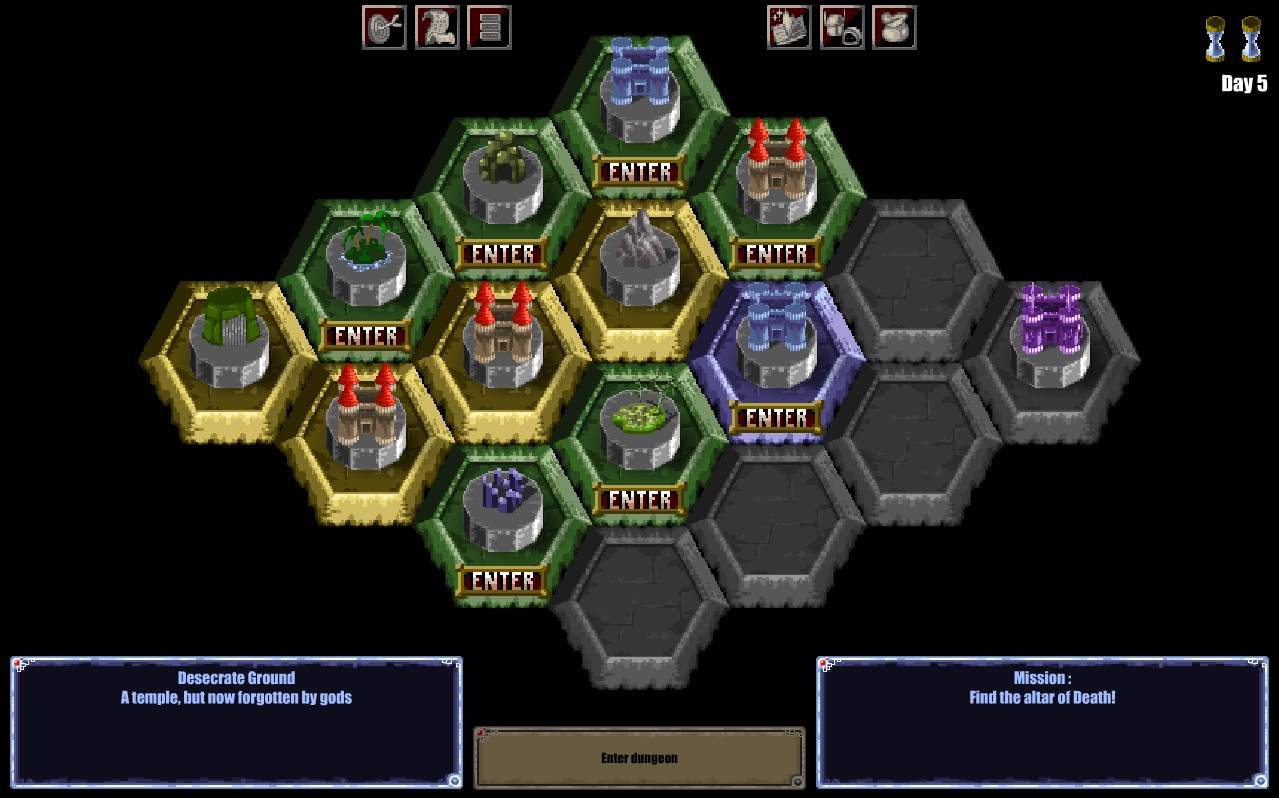 There are a multitude of different dungeons, offering their own buffs, creatures, and traps… All of which you will become uncomfortably familiar with. You have seven days to cross the map, if you don’t want to lose any children, and completing it in that time will give you one of two “good” endings. If you go past the seven days, a child will die each day until the 9th and final child. This gives you 5 chances to get to the final castle, (for those doing the math) so you must choose your path wisely. If you get completely bamboozled by a dungeon, it is possible to change your course, but it may be wise to try and complete the dungeon you picked, since it will be rerandomized upon your return… And since the clock is ticking to keep those kids from being sacrificed, and blazing a new trail can cost precious days. Overall a very fun game if you enjoy scraping stats together while racing against the clock to beat the big baddie. 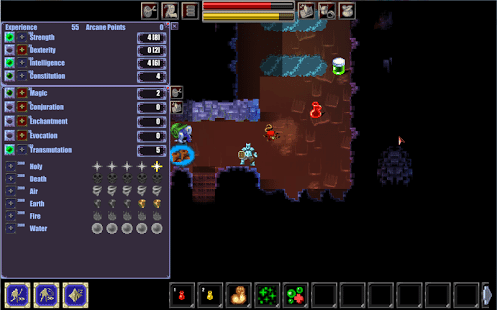 On the downside to this game, the music and sound effects don’t do a thing for me. Generic, bland, and maybe even kinda grating after a while. Many of the enemies are simply reskinned instead of being something completely different to match the new dungeons you delve into. The enemies are still quite varied though, and the hero sprite is quite lovely. Different races and classes are represented with the equipment given to them. Because everyone knows RPGs are about 20% fashion-show… Give or take. Still, might be nice to see a bit more love shown to the critters you’ll be beating on for the entire game.Getting used to the keypad/spacebar combo doesn’t quite feel right to me, but is the most efficient way to move diagonal, which has nothing to do with the game and is just a personal gripe. The game doesn’t do much that its predecessors haven’t, and struggles to really create an identity, but the timed aspect is engaging and the core mechanics are there, and done nicely. There is a lot to love about this game, but it’s likely for the more hardcore fans of the genre.

Summary: A dungeon-delving roguelike with an intense difficulty curve.