RTS games usually keep the scales relatively balanced when it comes to unit distribution. Infested Planet throws almost all of that out the window. While the aliens seem to have a happy society in place, it falls on your shoulders to disrupt it entirely and establish something much more pleasing to the obviously superior human eye. Thousands of aliens will march toward you in defense of their home, but we are determined to rid this completely non-sentient planet from its infestation. It’s not a genocide! It’s liberation! Moral questions aside, Infested Planet offers extremely unique strategic gameplay with thousands of enemies marching on almost every base relentlessly. Will it colonize your heart? Or is this game a plague? Let’s look closer at Infested Planet. 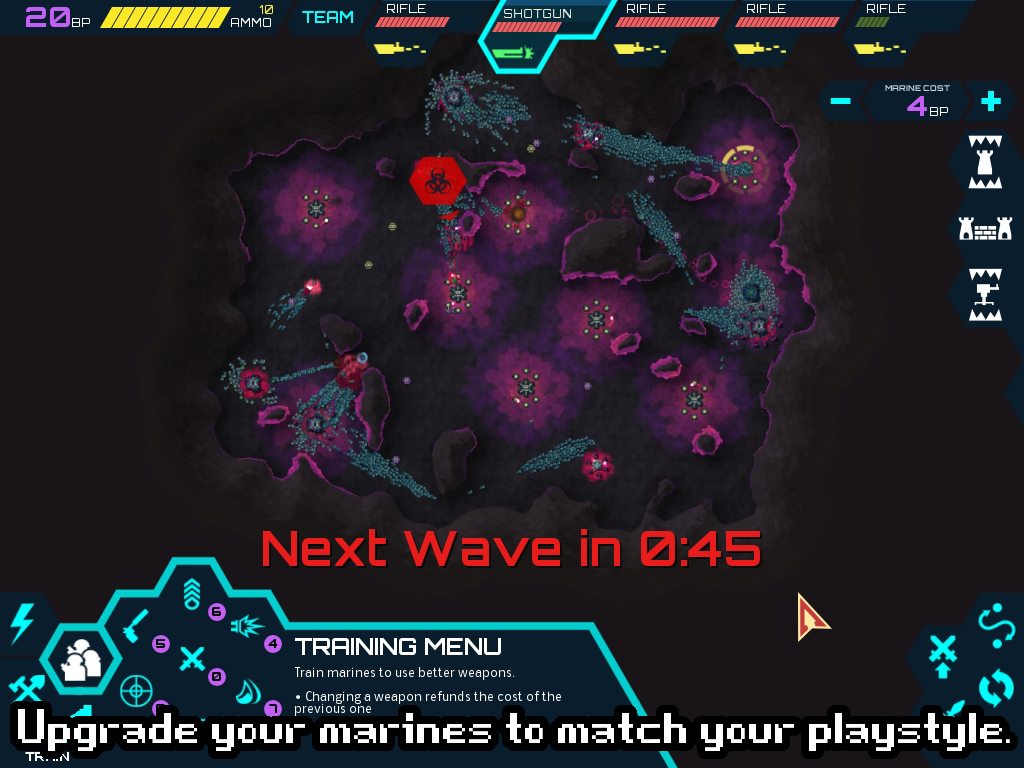 Infested Planet doesn’t offer a string of interlocking building or unit upgrades, and for that I am SO grateful. Instead, rewards are offered for completing missions which can be used to purchase a variety of upgrades to your units. There are grenades, to class unlocks, along with a variety of buildings which allow you to suit your ground forces to your playstyle. Are your heavy machine-gunners a bit to slow and unwieldly to hold the entire map all by themselves? Pepper in a shot-gunners and some scouts to do the legwork. As your heavies push toward the enemy bases, perhaps you will find yourself overwhelmed again. Upgrade a couple of them to flamethrowers and watch as the swarm is beat back by a wall of flame. If all else fails, build a helipad to bring in chopper-strikes and thin the horde. The options are limitless, and all equally satisfying. 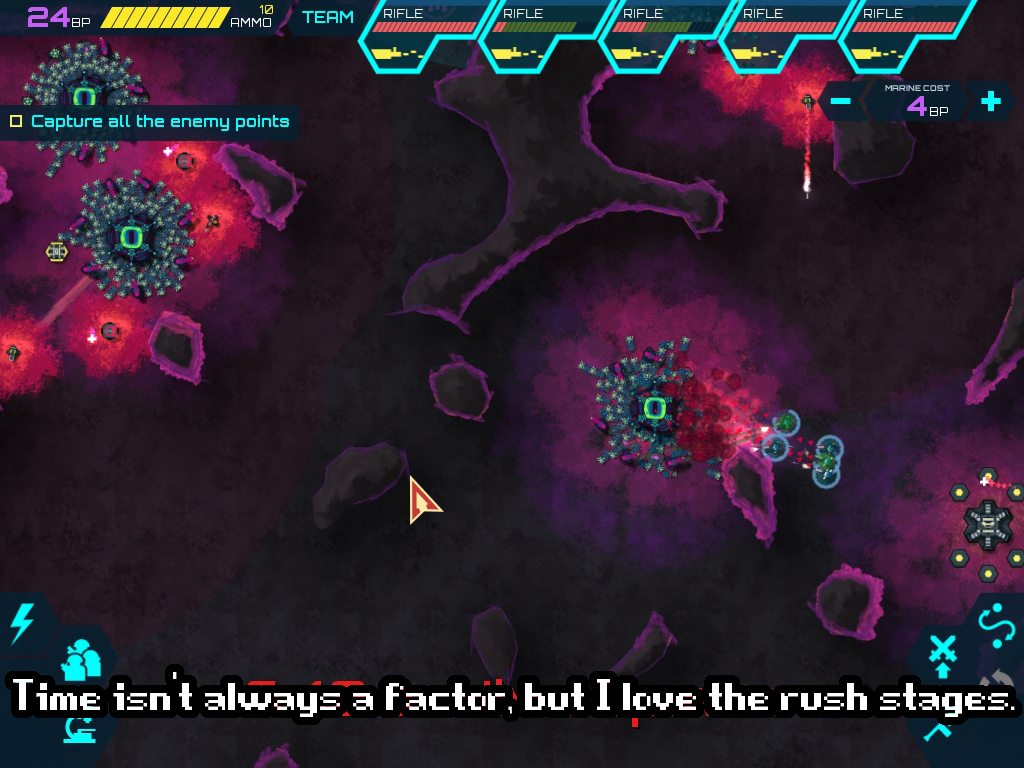 Aside from picking how you want to destroy the hive during gameplay, there are also a ton of game-modes that allow you to customize HOW you want to play. One of my personal favorites features a time-limit and permadeath, which makes the impending horde that much more terrifying. The story mode features some aspects that constrict freedom of play, but I would argue that that’s what a game does. Sometimes there is a path that must be taken, the freedom still comes in the way you decide to take it. I found myself repeatedly playing missions to get the maximum amount of money possible in order to unlock the next delicious explosives-laden fruit from the tech tree. Not a necessary thing to do, but the randomized levels keep things consistently fresh. 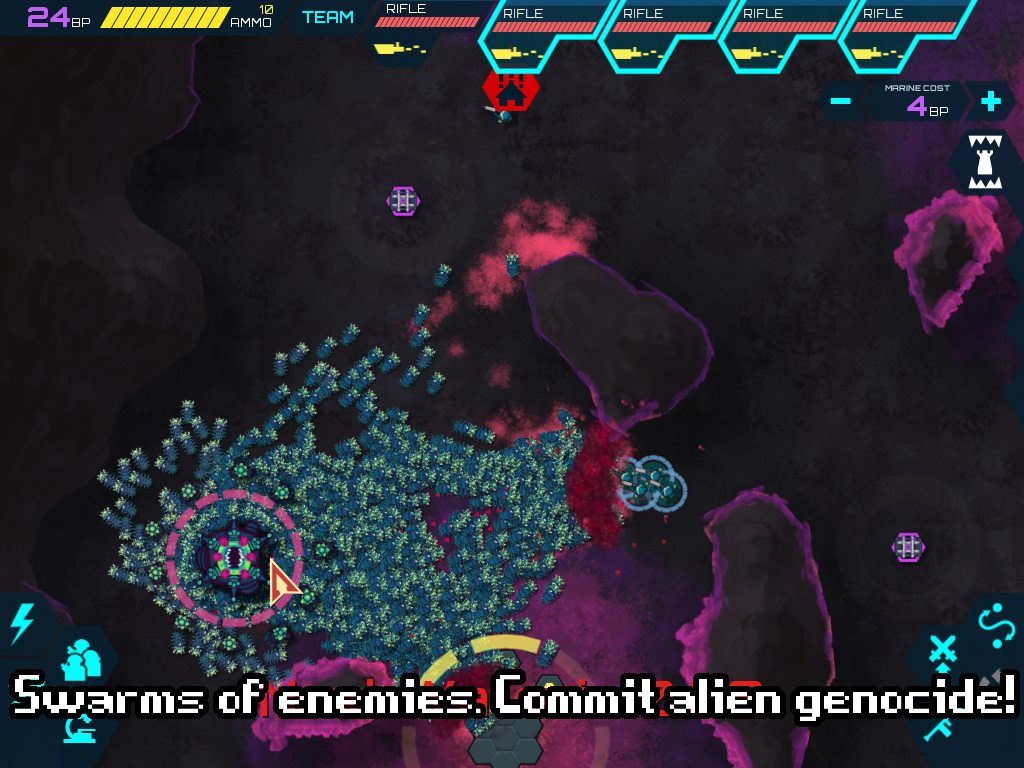 The story in this game falls quite flat, and doesn’t attempt to touch on the bevy of moral questions. The level design doesn’t seem extremely meticulous largely due to the randomized nature, but Infested Planet has certainly earned its place in my Steam library. Very few games offer enemies this endless. Your tactics need to be tight and your responses need to be on point. I supremely enjoyed the mutations of the aliens throughout the different stages, and thanks RocketBear Games very much for the review copy. I am extremely glad Infested Planet came out of Early Access with such success. This is a game that truly needs to be experienced. As you pit your squad of marines against the ravenous hordes, you will find yourself cheering them on and even mourning their little pixelated deaths.

Verdict: Infested Planet will please RTS fans as well as anyone that enjoys truly strategic gameplay.