From September 1st to September 5th the classic Mafia game will be free on Steam to celebrate 20 years of Mafia franchise. Make sure to claim the game in that period so you keep it in your account forever. 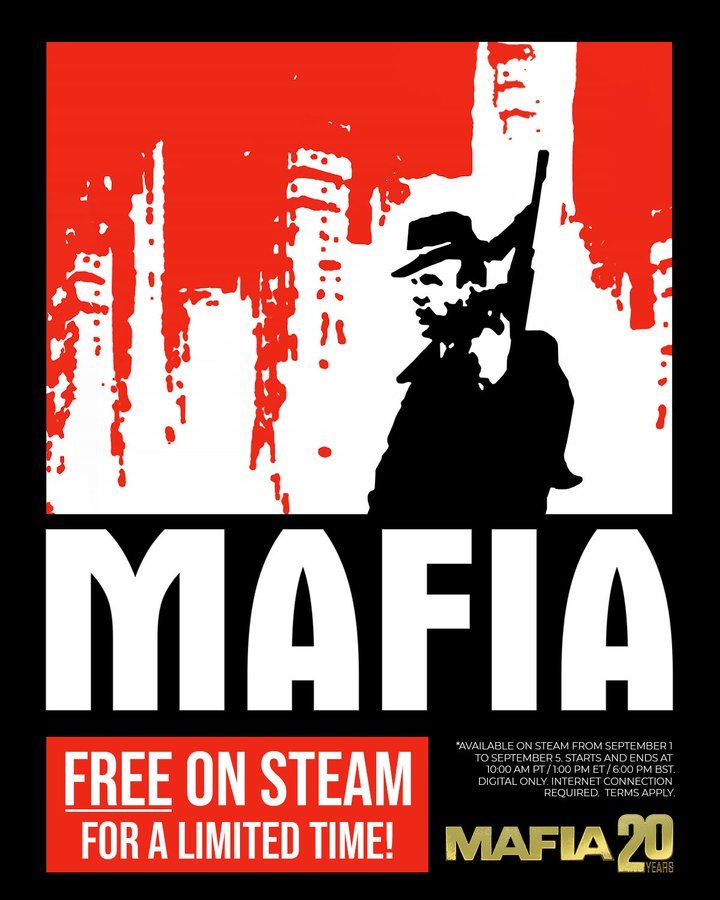 Wow, has it already been 20 years since this legendary game was released? Mafia launched waaaay back in 2002 and has spawned one great and one not-so-great sequel, and now’s the chance to (re)play this now classic game – for free!

To celebrate 20th anniversary of the first Mafia game and to announce a yet unnamed 4th Mafia game, starting from September 1st 2022 Mafia will be available for free on Steam!

Note: this is not the Mafia: Definitive Edition but the original game that has an edited soundtrack (it does not include the original licensed music).

It’s 1930. After an inadvertent brush with the mafia, cabdriver Tommy Angelo is reluctantly thrust into the world of organized crime. Initially, he is uneasy about falling in with the Salieri family, but soon the rewards become too big to ignore. As he rises through the ranks, the paydays keep getting bigger, but the jobs get even dirtier. Tommy may ultimately earn the respect of the Salieris, but becoming a Made Man will leave him more conflicted than ever with the new life he has chosen.

Explore more than 12 square miles of New Heaven, a quintessential 1930’s American city based on historic Depression-era architecture and culture.

Play more than 20 thrilling missions inspired by events from the 1930’s. Rise through the ranks of the Salieri family from foot-soldier to Made Man, taking on mob hits, car chases, bootlegging, shootouts, bank robberies and more.

As a daring getaway driver, get behind the wheel of more than 60 historically-inspired cars featuring realistic physics and real-time damage.
Complete those grittier jobs with more than a dozen weapons at your disposal. Choose from baseball bats, sawed-off shotguns, magnums and the renowned Tommy gun to deal with any wise guy who dares to cross you.

HOW TO GET THIS FREE PC GAME ON STEAM:

To get Mafia for free, wait until the giveaway starts on September 1st, head over to Steam and add the game to your account!

That’s it! Enjoy your game 🙂

Download the Trippy Shooter Game SAMOLIOTIK for free at IndieGala

Humble Book Bundle: All About Tolkien