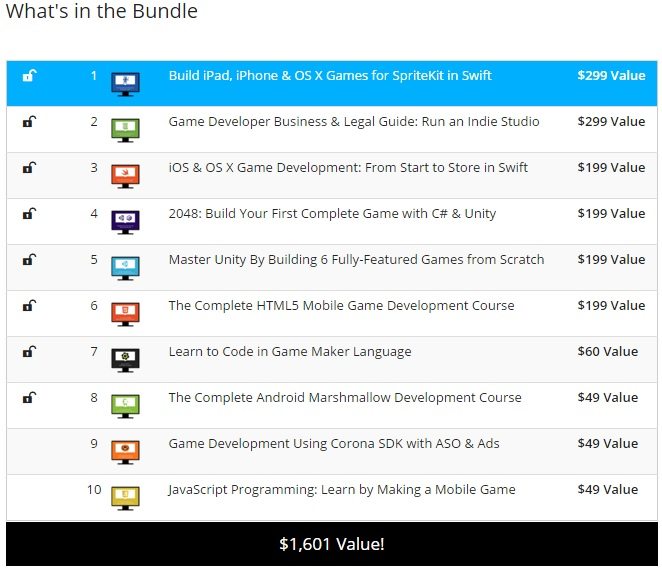 Get it while offer lasts at IGB DEALS

Pay What You Want For:

Certainly you can spend endless hours poring over the minutiae of game development theory, but the only way to really learn is by doing. Throughout this course, you’ll walk through the process of building 5 games for various Apple devices, master use of Swift and SpriteKit, and finish your lessons having built real apps you can proudly publish for immediate usage.

If you’re serious about launching your own game development studio, you’ll need to navigate legal and business issues the likes of copyright disputes, disagreements over contract wording, and more. Avoid squandering your savings on exorbitant lawyer fees by learning to address these issues yourself.

Get premium game development instruction from a battle-tested pro. You’ll learn directly from a seasoned developer, diving into his tried-and-true game development process certain to turn your app idea into reality.

Remember that 2048 game that had everyone addicted to their phones, swiping numbers every which way? Take a peek into what’s under the hood. Dive into use of the Unity3D game engine and C# programming, and learn everything from how to write scripts to enabling functions like tracking and storing scores.

Learn how to use Unity3D, and you’ll have amassed some real game development firepower. You’ll be well-equipped to create both 2D and 3D games, playable on iOS, Oculus Rift, and many other popular platforms.

Master game app creation by utilizing JavaScript in conjunction with the Phaser HTML5 development framework. With Phaser’s cross-platform features, you’ll gain an understanding of a hybrid app development process that will turn you into a flexible, versatile game developer, able to craft apps for both iOS and Android alike.

Here, you’ll learn not only to utilize the Game Maker program, but also build a solid foundation from which to expand your general programming skills. You’ll be walked through the process of creating a maze game, and will master the nitty-gritty of using variables, if-else statements, for loops, and more—all highly technical concepts at face value, but nothing you won’t be able to handle.

Get with the times, and learn to program for Android’s latest operating system version. Master the art of creating games for Marshmallow by creating 5 real-world apps, diving into material design principles, implementing ListViews, and more. By course’s end, you’ll be able to create apps for both smartphones and wearables, ready to be downloaded by legions of eager users.

Add Corona SDK to your coding arsenal—a powerful platform that will expedite app development for iOS, Android, Windows Phone, and Kindle. You’ll utilize Corona’s API library to build your game’s architecture, integrate ads, and much more, going from idea to published app in less time than it takes you to say “Corona SDK” three times fast.

Learning to code can seem perfunctory, but not if you’re working towards completing a hands-on project. In this course, you’ll master all things JavaScript—variables, objects, strings, and more—in the process of creating a multi-level game playable by other users and publishable to the app store of your choice.

Pay what you want and start building the game of your dreams at IGB Deals!

Humble How to Do Everything and Anything Book Bundle